CNN - Behind the scenes at Kennedy Space Center 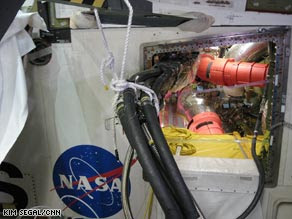 Behind the scenes at Kennedy Space Center

Going behind the scenes at Kennedy Space Center is like visiting another planet. The employees working on the shuttle fleet speak their own language -- a language made up of acronyms.

The orbiter is maintained in the OPF (orbiter processing facility) before it goes to the VAB (vehicle assembly building), where the ET (external tank) and SRBs (solid rocket boosters) are attached to it.

As NASA prepares for the scheduled launch of the space shuttle Discovery about 9 p.m. Wednesday, Kennedy Space Center employees have been busy keeping the shuttle fleet in tip-top condition. CNN visited the facility recently to learn about shuttle maintenance and launch preparation.

In the orbiter processing facility, the team was readying the orbiter Atlantis, which is scheduled for flight after Discovery's mission to the international space station. Atlantis' first launch was in 1985, and it has flow (Click Here for Full Article)

Posted by Bayourat Rocketry at 2:43 PM