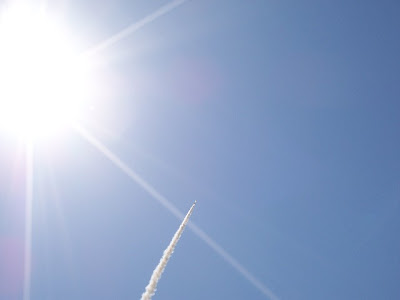 Saturday's launch was awesome with many successful flights including a two stage and my 4x29SS Ultimate flying on two H180's and air starting two G79's. One H180 came up to pressure first then the second kicked in after it had left the rail. So the flight was a little less then vertical. Only one G79 lite. Because the other igniter lead had been burnt by one of the H180's. It was a successful recovery and all is well with the rocket. A little adjustment to the routing of the wires and better motor prep on the H180 and I think I can get it perfect. The next time I'll be flying this rocket will be at Southern Thunder in June.
Posted by Bayourat Rocketry at 8:21 AM