The Most Powerful Telecommunications Satellite Ever Launched. Will Enable Satellite Communication From Your Smartphone!

Lift-off of the Ariane 5 ECA of flight V189 from Europe's Spaceport in French Guiana on its mission to place the heaviest and most powerful telecommunications satellite ever launched, Terrastar 1, into geostationary transfer orbit. 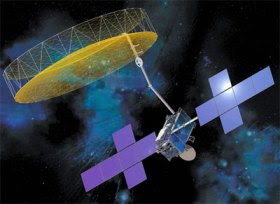 Deployment of TerreStar-1 Marks Significant Milestone for both TerreStar and the Mobile Communications Industry - as TerreStar is Closer to Delivering a Truly Integrated Satellite-Terrestrial Mobile Communications Network.
"With the successful launch of TerreStar-1, we are redefining the mobile communications landscape," said Dennis Matheson, CTO of TerreStar. "We are creating a new paradigm in mobile broadband network services and devices that will leverage our integrated satellite and terrestrial communications components to enable true ubiquity and reliability - anywhere in the United States and Canada." "Today's launch is just the beginning of the TerreStar story," said TerreStar President, Jeff Epstein. "We believe there are tremendous opportunities ahead - in both the commercial and government sectors - and we remain focused on our promise to help solve the critical communications and business continuity challenges faced by government, emergency responders, enterprises and rural communities." Prior to the launch of TerreStar-1, the Company, with its partner EB (Elektrobit), introduced the world's first quad-band GSM and tri-band WCDMA/HSPA smartphone with integrated all-IP satellite-terrestrial voice and data capabilities. Similar in size to today's mainstream mobile devices, TerreStar's dual-mode smartphone will allow users to seamlessly and securely stay connected to TerreStar's satellite and terrestrial network. TerreStar's network will operate in two 10-Mhz blocks of contiguous MSS spectrum in the 2 GHz band throughout the United States and Canada - with a spectrum footprint that covers a population of nearly 330 million. To watch or download video coverage or images of the TerreStar-1 launch, or for more information about TerreStar, please visit: www.terrestar.com.
Posted by Bayourat Rocketry at 11:09 PM