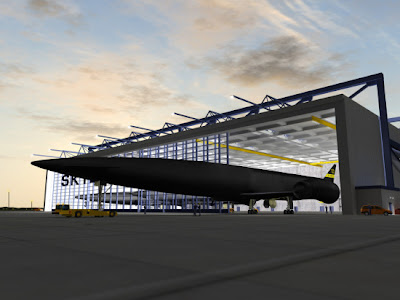 Somewhat reminiscent of one of Professor Calculus's creations for cub reporter Tintin, the Skylon is what is known as a reusable launch vehicle for unpiloted space shenanigans. In short, it's a space plane. The creation of Reaction Engines Limited, a British outfit based at the Culham Science Center in Oxfordshire, the Skylon will be able to take off from and land at normal airport runways in order to deliver its payload of up to 13 tons in orbit.
All of this is down to Skylon's Sabre propulsion system, which is part jet engine, part rocket engine. The thrust is created by burning hydrogen and oxygen — a tricky concept, because air in the lower atmosphere can reach temperatures of 1000 degrees Centigrade. In order to cool the air before compressing and burning it, Reaction Engines have created a heat exchanger pre-cooler, which consists of ultra-fine piping that drops the temperature of the hot intake gases to minus 130 degrees Centigrade in just one hundredth of a second.
Whilst perhaps not yet as tangible as Richard Branson's White Knight Two, Skylon's technology is, you've got to admit, pretty amazing. And just look at the scale of the thing — it's immense!What does it remind you of?

*Cheaper than most space travel, that is.

Posted by Bayourat Rocketry at 9:02 AM