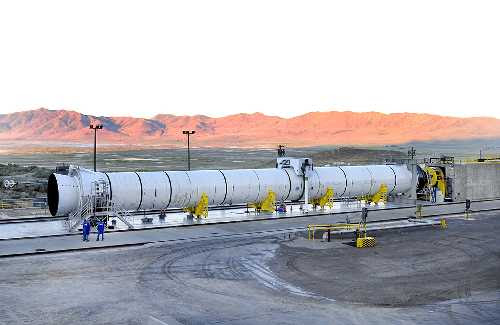 Alliant Techsystems (NYSE: ATK) Space Systems and NASA will make history on August 27 as the new Ares I five-segment first stage is tested, marking the start of a new era of space exploration.
What: Horizontal ground test firing of Ares I first stage
When: Thursday, August 27, 2009
Time: 1 p.m. MDT
Where: ATK Space Systems facility in Promontory, Utah
Test Objectives/Background:
A total of 46 design objectives will be measured through 650 instrument channels
The Ares I design is based on the design of the space shuttle’s four-segment booster
The addition of the fifth segment will increase the maximum thrust performance to approximately 3.6 million pounds
The first stage of Ares I has been under development since 2005, it measures 12 feet in diameter and 154 feet in length.
The cases have previously flown on the space shuttle, collectively launching 48 missions–including STS-1.
Posted by Bayourat Rocketry at 12:38 PM