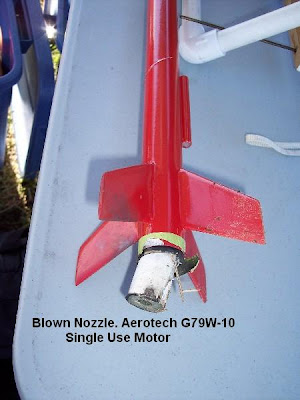 What a weekend! We had a great launch with lot's of memorable flights. Here is a list of my successes and failures.

My first flight was my Apogee Aspire. I had loaded it up with a G79W single use motor. When the button was pushed the rocket exploded off the pad. Then about 10 feet off the rod the nozzle blew and the rocket fell backwards and landed hard on the ground. the body tube had suffered a crease just above the motor. The rest of the rocket looked to be in good shape so I loaded it backup with a G78G motor and made a second attempt. This time the failure was much more spectacular. The rocket ripped off the pad and got up about 500ft and proceeded to disassemble it's self back into a kit. As it rained back down as rocket confetti I couldn't help but think about rebuilding this kit. I really like small fast rockets. I got the nose cone back so it will be built again. 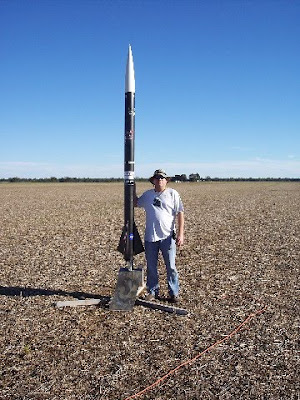 It was time to move on to bigger and better things. I started prepping my rocket "The Max Attack". This is my 5" Performance Rocketry Competitor Five. I had loaded it up with a 75/6000 Loki M1200 sparky motor. After packing the chute and shear pinning the nose cone I loaded it up on the pad. The rocket weights about 40lbs and is tough to get on the pad by myself. Thanks to Bou Button for helping me get it on the rail. We had everything set. Altimeters armed, igniters hooked up. When the button was pushed nothing happen. Clarence pushed it again and nothing. "Check the igniter." Again nothing. There's is something about a big rocket when it's just sitting on the pad and won't launch that will rattle the coolest of nerves. But patients and experience prevailed as we practically rewired the whole launch controller only to find the clip whip was at fault. We changed out the leads and we were back in business. This time the count down ended in lots of smoke, fire and a load roar. The rocket rose off the rail spitting hot molten Titanium sparks and thick black smoke. This motor has a progressive thrust profile starting off at about 250lbs. So the lift off was slow. Then it ramps up to a peak of 350lbs 2 seconds into the burn. So it made for a spectacular lift off as it left the pad and then accelerated through the 4.5 second burn. 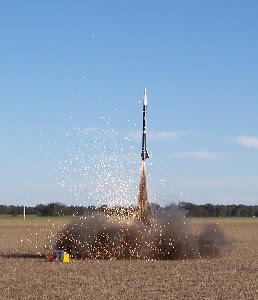 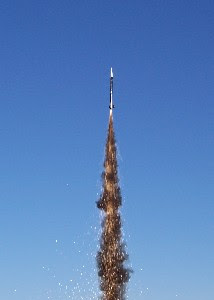 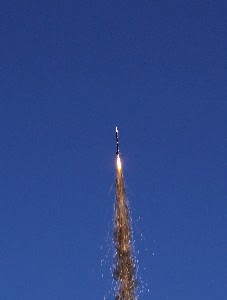 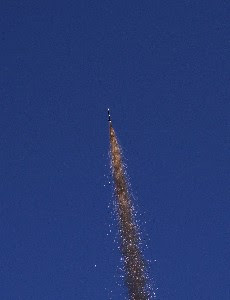 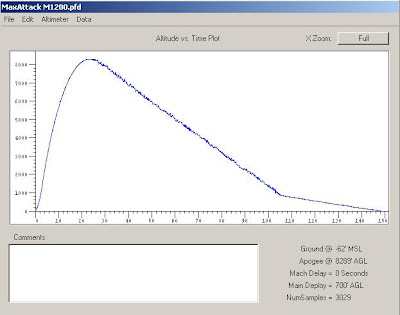 Now that the burn was complete. The rocket coasted to an apogee of over 8,200'. It arced over perfectly visible against the crystal clear blue sky. As I was starting to hold my breath the first apogee charge blew. The rocket separated in two and started the long fall to 1,000' were the main deployed right on cue. The rocket settled down in the field 50 yds. off the road. The flight was perfect but the rocket had picked a mud bog to land in. All was recovered with out incident, except for a muddy pair of shoes. That was it for me on Saturday.

Saturday night we all met at the Mexican restaurant at the Motel. We all enjoyed a nice dinner and swapped war stories.

Sunday morning was another perfect day. I decided to fly my scratch build rocket Research 3 with the camera payload. I chose a J350 as the motor since I was trying to get a good picture of the rocket under the 72" custom Spherachute parachute for there web site. The flight was perfect and produced another awesome on-board video. Even though the camera cut off at main deployment. I think the record button got pressed by the bracket that holds the camera down. The camera seems to be in working order. I even got a great picture of the rocket under main for there website. 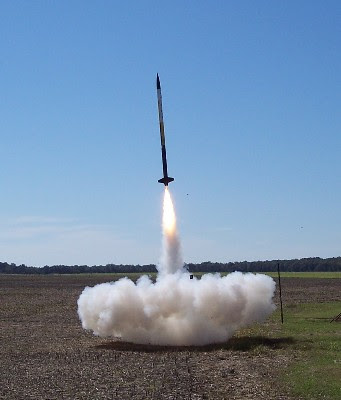 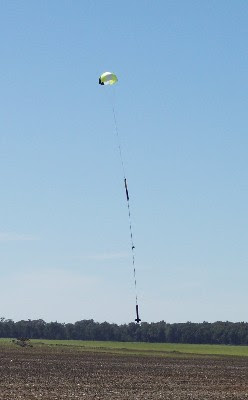 Now it was time for my GPS experiment. I flew it in my Little Dog. It was suppose to be an I357B but turned out to be an I245G. I picked up the wrong reload. Oh well. This turned out to be the least of my problems. The GPS device is a Boost mobile cell phone. The phone was mounted in the nose cone directly above the altimeter. After I armed the altimeter on the pad and was hooking up the igniter the altimeter kept resetting. Hmmm. I scratched my head. Then pulled the rocket off the pad and back to the work table. I disassembled the altimeter bay and found nothing wrong. I changed some wires and put it all back together. This time after I armed the altimeter and was hooking up the igniters. BOOM! The charge blew. Luckily I was down on my knees hooking up the igniters and didn't get the charge in my face. But it scared me half to death. After I regained my composure I decided to go with motor deployment. I knew it would be a less then favorable deployment since it would be way short of a delay. But It's a tough little rocket and I knew it could take the abuse. So I loaded the charge and proceeded with the flight.

The rocket was on the pad and I was at the computer screen tracking the GPS signal. The button was pushed and the rocket headed up on a pretty green flame. Oops that's suppose to be blue. Then as the rocket rose I noticed the GPS signal had stopped. The rocket quickly headed to 3,600' and deployed hard. When I recovered it I found the cell phone was off. I tried to turn it on. nothing happen. It's dead. After reviewing everything I found it was the phone that was causing the altimeter to reset and ultimately blowing the charge on the pad. Then it was the G force of launch the killed the phone. Over all the experiment was a failure but lessons were learned and the phone is being replaced under warranty. Next time I will separate the phone from the altimeter and it will be protected from the excessive G force.

Hope to see you at a launch soon!
Posted by Bayourat Rocketry at 8:49 PM