What Happens When Galaxies Collide 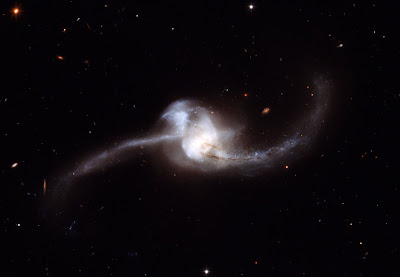 A recent NASA/ESA Hubble Space Telescope image captures what appears to be one very bright and bizarre galaxy, but is actually the result of a pair of spiral galaxies that resemble our own Milky Way smashing together at breakneck speeds. The product of this dramatic collision, called NGC 2623, or Arp 243, is about 250 million light-years away in the constellation of Cancer (the Crab).

Not surprisingly, interacting galaxies have a dramatic effect on each other. Studies have revealed that as galaxies approach one another massive amounts of gas are pulled from each galaxy towards the centre of the other, until ultimately, the two merge into one massive galaxy. The object in the image, NGC 2623, is in the late stages of the merging process with the centres of the original galaxy pair now merged into one nucleus. However, stretching out from the centre are two tidal tails of young stars showing that a merger has taken place. During such a collision, the dramatic exchange of mass and gases initiates star formation, seen here in both the tails. The prominent lower tail is richly populated with bright star clusters — 100 of them have been found in these observations. The large star clusters that the team have observed in the merged galaxy are brighter than the brightest clusters we see in our own vicinity. These star clusters may have formed as part of a loop of stretched material associated with the northern tail, or they may have formed from debris falling back onto the nucleus. In addition to this active star-forming region, both galactic arms harbour very young stars in the early stages of their evolutionary journey. Some mergers (including NGC 2623) can result in an active galactic nucleus, where one of the supermassive black holes found at the centres of the two original galaxies is stirred into action. Matter is pulled toward the black hole, forming an accretion disc. The energy released by the frenzied motion heats up the disc, causing it to emit across a wide swath of the electromagnetic spectrum. NGC 2623 is so bright in the infrared that it belongs to the group of very luminous infrared galaxies (LIRG) and has been extensively studied as the part of the Great Observatories All-sky LIRG Survey (GOALS) project that combines data from some of the most advanced space-based telescopes, including Hubble. Additional data from infrared and X-ray telescopes can further characterise objects like active galactic nuclei and nuclear star formation by revealing what is unseen at visible wavelengths. The GOALS project includes data from NASA/ESA's Hubble Space Telescope, NASA's Spitzer Space Telescope, NASA's Chandra X-ray Observatory and NASA's Galaxy Evolution Explorer (GALEX). The joint efforts of these powerful observing facilities have provided a clearer picture of our local Universe. This data used for this colour composite were taken in 2007 by the Advanced Camera for Surveys (ACS) aboard Hubble. The observations were led by astronomer Aaron S. Evans. A team of over 30 astronomers, including Evans, recently published an important overview paper, detailing the first results of the GOALS project. Observations from ESA's X-ray Multi-Mirror Mission (XMM-Newton) telescope contributed to the astronomers' understanding of NGC 2623.
Source
Posted by Bayourat Rocketry at 8:53 AM