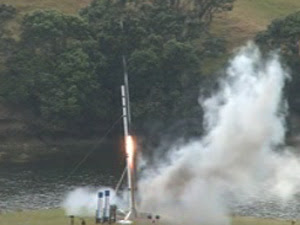 The successful launch came after a day of delays.

In a puff of smoke, Atea-1 accelerated to five times the speed of sound, leaving Great Mercury Island for the great unknown.

At daybreak the weather conditions had been perfect for lift-off. The rocket sat centre stage while the man who paid for it, Mark Rocket, sat in the paddock above.

As the rocket scientists worked from a special underground bunker, a crowd of onlookers gathered together, but the last minute the rocket's final checks didn't check-out after an aerocoupler, which connects the fuel line to the rocket, froze.

A three hour delay became a seven hour delay, but an emergency flight to the mainland brought a replacement part for the rocket's jammed valve and the launch finally went ahead.

"Boy, it just took off. I think it was hard to comprehend that it could go that fast," says Fay.

Another spectator says the blast-off was absolutely awesome.

"I thought at minus one countdown, she was a fizzer because all I could see was a spark coming out the bottom. And then it just disappeared. It hit the afterburners before the tree tops I reckon," he says.

And with a successful launch now complete the next blast-off could carry anything from someone's ashes to a space age advertising message.

The launch company, Rocket Lab Ltd, started up three years ago with the aim of developing a series of Atea rockets that would make space more accessible, Mark Rocket says.

"This is the first step in a long journey," he says.

The six-metre-long craft should reach speeds of up to Mach 5, flying 120km into the air, before splashing down in the sea, where it will be picked up.

Atea is the Maori word for space as the team wanted an indigenous name for the rockets.

The first rocket Atea-1 has been named Manu Karere by the local Thames iwi, which means Bird Messenger.
The payload from New Zealand's first home-grown space rocket is floating somewhere off the Coromandel coast following this afternoon's successful launch.

It burned for 20 seconds or so, reaching its target speed of up to Mach 5, or 5000kmh, reaching at least 100km altitude and spending between 10 and 20 minutes in the sky before splashing down.

It is the first time a privately-owned rocket has been launched in the southern hemisphere.

Atea is the Maori word for space as the team wanted an indigenous name for the rocket.

The target area for the launch was about 50km northeast of the island.

The team hope to pick the rocket's payload up within the next two days and physically recover its data.

Rocket Lab was now waiting for the payload's GPS signal to be picked up, company director Mark Rocket said.

That could depend on the waves or how buoyant the payload finally was when it splashed down, he said.

The team would not know how high the rocket reached, but with a new nose cone Rocket speculated it could have reached as high as 150km.

That height was suborbital, but it was still considered to be space as there was no atmosphere.

The International Space Station was about 300km above Earth, Rocket said.

Rocket, who changed his name from Mark Stevens about seven years ago, said the crew was very, very pleased with the launch, which was originally scheduled for about 7am on Monday.

However, an aerocoupler, which connects the fuel line to the rocket, froze, effectively sticking the rocket to its launch pad.

A helicopter was dispatched from the launch site to Whitianga to pick up another hydraulic coupling - worth about $6 - from an engineering supplier.

The fuel had to be dumped and the rocket refilled.

"Peter Beck (Rocket Lab's chief executive and technical director) is a brilliant scientist and he managed to think quickly on his feet."

Mr Rocket said the feeling after the launch was profound and one of pure elation, incredible.

"A lot of people were crying. It was really dramatic. The power of the rocket is just incredible."

Rocket said the cost of the project so far was commercially sensitive.

Rocket Labs, which was set up three years ago, did not have any government investment. While it did not have the budget of NASA needless to say it's a considerable investment, he said.

"The last six months have been a terrific amount of work. The tech team has put in a massive effort.

"It's not trivial sending something into space. This is a huge technological leap for New Zealand."

The next step after recovering the payload would be planning for the next launch, he said.

Rocket Lab was a space launch business and there was massive interest in the company's products from around the world, he said.

While the Atea-1 is New Zealand's first home-grown and privately-funded space rocket it is not the first to be launched from these shores.

In 1963 an imported rocket was launched to a height of about 75km to conduct upper atmospheric research in a joint venture between Canterbury University's physics department and the Royal New Zealand Air Force.

It was launched from Birdlings Flat, 44km southeast of Christchurch, spent about 2 1/2 minutes airborne and landed in the sea.
Posted by Bayourat Rocketry at 7:22 AM