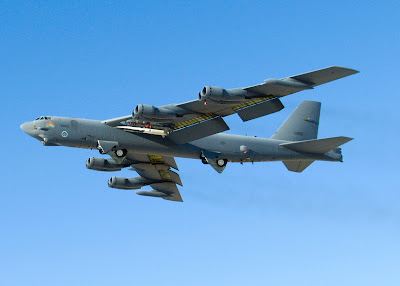 The US Air Force Research Laboratory's X-51A WaveRider scramjet engine demonstrator completed its first captive-carry flight under the wing of its B-52H mothership from Edwards AFB on Dec. 9. The first free flight is planned for mid-February.

The B-52 climbed to the planned launch altitude of 50,000ft during a 1.4h flight that checked out systems and telemetry. The next flight, planned for mid-January, will be a full dress-rehearsal for the first of four planned X-51A hypersonic test flights.

The Boeing-built X-51A will be released at 50,000ft over the Pacific and accelerated to Mach 4.5 by a solid rocket booster. The cruiser will then separate and its hydrocarbon-fuelled scramjet, developed by Pratt & Whitney Rocketdyne, will ignite and run for about 300 seconds, accelerating the vehicle to Mach 6.

That's the plan, anyway, and the Air Force has four shots to prove that practical hypersonic propulsion is a reality. Tests of the fuel-cooled scramjet have gone well on the ground, but a lot is riding on the X-51A. If it succeeds, missile and other applications could quickly follow. If it fails, hypersonics could be set back for years.

From: Aviation Week / Posted by: Graham Warwick
Posted by Bayourat Rocketry at 11:20 AM