A commercial space pioneer and a former astronaut are answering claims by an independent advisory panel that private companies do not meet NASA human-rating standards and last year's presidential review of the space program did not adequately consider safety.

In an annual report released Friday, the Aerospace Safety Advisory Panel, or ASAP, said it would be "unwise" to abandon NASA's Ares 1 rocket and turn to private companies to transport astronauts to low Earth orbit. The board said potential commercial crew transportation providers do not meet NASA safety standards for piloted vehicles. 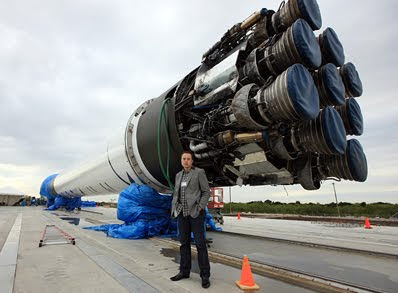 In an interview Monday, Musk responded to the ASAP findings and recommendations.

"I have to say I've lost a lot of respect for the ASAP panel," Musk said. "If they are to say such things, then they ought to say it on the basis of data, not on random speculation."

SpaceX and Orbital Sciences Corp. are developing the Dragon and Cygnus spacecraft, plus new launch vehicles, under a NASA contract to deliver equipment to the International Space Station beginning next year.

The ASAP report said neither company "is [human] qualified, despite some claims and beliefs to the contrary."

According to Musk, the panel's findings are "bizarre." He says the Falcon 9 rocket and Dragon spacecraft "meet all of NASA's published human-rating requirements, apart from the escape systems."

"They've spent almost no time at SpaceX," Musk said. "They've not reviewed our data. They have no idea what what our margins are, and what is and what isn't human-rated."

The safety panel was established by Congress following the Apollo 1 launch pad fire that took the lives of three astronauts in 1967. Since then, the board has been an independent voice on astronaut safety issues for NASA.

The Ares 1 rocket is part of the agency's Constellation program aimed at returning humans to the moon. The moon program is in danger of being slashed or revamped by President Obama in the coming weeks.

"The Ares 1 is a paper rocket that's far off in the future," Musk said. "Falcon 9 is a real rocket, most of which is at Cape Canaveral right now."

The Falcon 9 is set for its maiden launch no earlier than March 3, but that is a tentative date and is likely to slip, according to SpaceX officials.

The ASAP report cited the Ares 1 design's emphasis on safety to back up its findings, saying NASA should not cancel the program unless commercial alternatives are on equal or better safety footing.

The panel also criticized the presidential review team that last year presented the White House with eight options for the space program's future. Most of the Augustine commission's alternatives involved scrapping the Ares 1 and turning to commercial providers for astronauts in the near-term.

"We did not feel it was appropriate for our committee to define what should be the specific safety criteria for commercial crew access, but that it was up to NASA and other regulatory agencies to make this determination," said Leroy Chiao, a member of the Augustine commission, in a response to written questions.

Chiao is also a former astronaut and a Spaceflight Now contributor.

"We stated that commercial crew access should be pursued, with an acceptable level of safety, defined by the appropriate agencies," Chiao said.

The safety panel is chaired by retired Navy Admiral Joseph Dyer. NASA Administrator Charles Bolden was a member of the board until July, when he stepped down to take the helm at NASA.