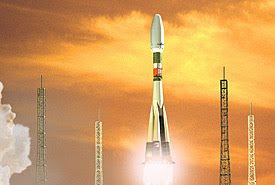 MOSCOW (Reuters) - The first launch of a Russian space rocket from a site outside Moscow's control has been delayed while engineers test a service tower, Interfax news agency reported on Friday.

A modified Soyuz cargo ship had been due to take off before the end of this year from Europe's spaceport in French Guiana. Its location close to the equator means less fuel is needed to reach a geostationary orbit than launches from Russia's Baikonur site in Kazakhstan.

The new vehicle will be able to carry payloads of up to 3 tonnes into orbit, nearly double the weight that can be launched from Baikonur.

"The first launch of the Soyuz-ST rocket is not possible before the end of the year," Vladimir Gnezdilov the general director of Mir, a contractor involved in the launch was quoted by Interfax as saying.

Gnezdilov blamed the delays on the installation of a mobile service tower at the new site, 13 km (9 miles) from the launch site for European Ariane launches, which must undergo further tests in the coming months.

After the United States retires its fleet of Space Shuttles later this year, the Soyuz capsules will be the only way to transport astronauts to the International Space Station.

The spaceport in French Guiana could be adapted for human spaceflight by Soyuz launchers, but there are no immediate plans to do so.

Soyuz' service startup at the Spaceport will introduce an updated version of this medium-lift workhorse launcher in side-by-side operations with Arianespace's proven heavy-lift Ariane 5 and new lightweight Vega.

The upgraded Soyuz – with its modernized avionics, improved-performance third stage, and enlarged payload fairing – has been validated in multiple successful launches from Baikonur Cosmodrome in Kazakhstan and Plesetsk Cosmodrome in Russia.

Soyuz flights from the Spaceport will be managed by Arianespace's seasoned mission team members – many of whom already have direct Soyuz experience through commercial launches performed from Baikonur Cosmodrome by the company's Starsem affiliate. In addition, Spaceport operations will be supported by the same Russian companies that have long overseen both manned and unmanned Soyuz missions.

Production of the initial four Soyuz launchers was ordered by Arianespace in 2007 from Russian industry, ensuring the initial vehicles will be available as planned. This was followed by a contract signed in September 2008 for another 10 Soyuz vehicles, which will be launched on commercial missions from the Spaceport or Baikonur Cosmodrome beginning in 2010.
Posted by Bayourat Rocketry at 8:47 AM