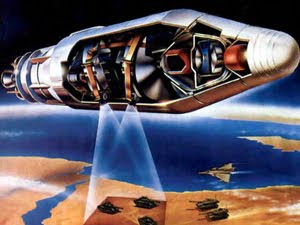 The 20-ton orbiter with a life expectancy of 10 to 15 years would be powered by a 150 to 500 kilowatt nuclear reactor and will be able to “monitor territories and airspace, provide informational superiority – including in armed conflicts – and perform target designation and traffic control. It will also be offensive-capable,” said Energia head Vitaly Lopota, as cited by ITAR-TASS news agency.

He did not specify what offensive capabilities the satellite would have; whether it will be able to target other spacecraft, ground targets, or both.

The concept goes against Russia’s voiced intention to keep space an arms-free zone. However, with several nations believed to be actively pursuing space-based or anti-satellite weapons, Energia’s design may find support among the country’s leadership.
Posted by Bayourat Rocketry at 2:09 PM