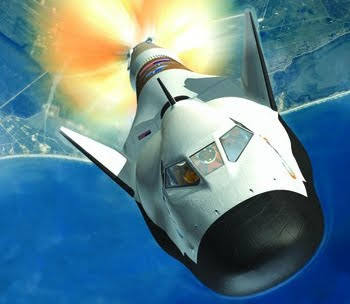 Sierra Nevada Corp. has $20 million in federal stimulus funds for its Dream Chaser commercial crew launch vehicle, but the company has already applied many times that amount in NASA funding for its high-stakes effort to build a private route to space for the agency’s astronauts.

The Colorado-based company is modeling Dream Chaser on the HL-20 lifting-body vehicle that NASA started as a potential International Space Station (ISS) crew rescue vehicle, which would have been able to transport a full station crew fleeing an emergency to a horizontal landing on runways anywhere in the world.

Now Sierra Nevada wants to use the HL-20s lifting-body shape to go in the other direction, riding an Atlas V rocket to orbit with an up to seven-person crew for the ISS, or with space-suited specialists trained to service other spacecraft in orbit. Because it was publicly funded, data from NASA’s HL-20 development effort is publicly available.

“We could take a vehicle that had almost 10 years of development and hundreds of millions of dollars of work,” says Mark N. Sirangelo, corporate vice president of Sierra Nevada Space Systems. “There are 1,400 wind-tunnel tests, [and] a variety of work that was being done. We largely kept the outer mold-line of the vehicle intact, so we were able to utilize much of the [previous] research,“ Sirangelo says.

Part of the company’s heritage is the hybrid-rocket technology used in the SpaceShipOne Ansari X-Prize win. SpaceDev, which owned the technology, is now a subsidiary of Sierra Nevada, and the company plans to use hybrid rockets to maneuver Dream Chaser in orbit.

The technology, which burns the solid-state synthetic rubber HTPB with nitrous oxide, is extremely safe, says Jim Voss, a five-time space shuttle astronaut who is the company’s director of advanced programs and program executive on Dream Chaser. But rather than use it to get from Earth to orbit, the company decided to work with United Launch Alliance (ULA) to fit Dream Chaser atop an Atlas V.

“We have taken the approach that we don’t have to have the absolute highest performance rocket engines for what were doing with it,” Voss says of the hybrid technology. “We have the benefit of the Atlas being so capable that it takes care of the most of the performance we need. We can use some rocket motors that are not quite as high in [performance] that still give us what we need.”

One previously troubling aspect of launching a lifting body on a rocket like the Atlas V was the bending moment it would impart on the structure of the overall stack. Voss says this will not affect the Dream Chaser/Atlas V combination due to the low angle of attack that the lifting body will have during ascent.

That first-order analysis still needs some work in the wind tunnel, Voss says, but if it proves out, there are many advantages to a lifting .body. The cross range after reentry offers a lifting body vehicle more opportunities to land at essentially any 10,000-ft. runway, and it allows for a much gentler return than a capsule.

As the ISS shifts from assembly to scientific research when the shuttle fleet is retired at year’s end, that down-mass capability and gentle landing should grow in importance. Scientists who have carefully nurtured samples through months of microgravity do not want them shaken up any more than necessary on landing.

Sierra Nevada plans to upgrade the HL-20 with composites and other modern materials. The cylindrical shape of its pressure vessel may make it easier to use composites than the complex capsule shape would allow (AW&amp;ST Feb. 1, p. 38). The company has assembled a team that includes Boeing Phantom Works, to build the test articles; Draper Laboratory, for guidance, navigation and control; Aerojet, for reaction control system technology; the University of Colorado, for human-rating; Adam Works, for composites; and MDA, for help with systems engineering.

For life support, both Oceaneering and Paragon Space Development Corp. are in the running (see p. 54).

The Dream Chaser was a runner-up in NASA’s Commercial Orbital Transportation System (COTS) competition, and Sierra Nevada chose to sign an unfunded Space Act agreement to remain part of the COTS program even without any of the program’s roughly $500 million in federal seed money.

Sirangelo says Sierra Nevada has spent more than $10 million of its own funds on Dream Chaser, and has completed four COTS milestones under that arrangement. The investment, and the Space Act approach, should pay off for the company when NASA begins looking for a commercial carrier to deliver its astronauts to the ISS.
Posted by Bayourat Rocketry at 5:56 PM