France To Pay Russia One Billion For 14 Soyuz Carrier Rockets 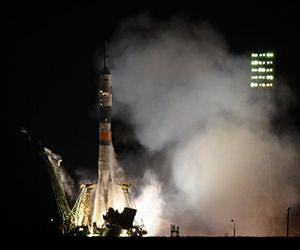 Moscow, Russia (RIA Novosti) Mar 09, 2010
France has put aside some $1 billion to buy 14 Soyuz carrier rockets from Russia, French satellite launch firm Arianespace CEO Jean-Yves Le Gall said Tuesday.
"We have ordered 14 Soyuzes from the Russian Federation; the contract's cost is about $1 billion. These are ambitious plans," Le Gall said at a Russian-French business forum, held as part of President Dmitry Medvedev's visit to France. His speech was broadcast by the Rossiya 24 TV channel.

The new deal marks another step in cooperation between Russia and France in the space sector. Arianespace signed a contact with Russia's space agency in 2008 for the launch of 10 Russian Soyuz-ST carrier rockets from the Kourou space center in French Guiana.

Le Gall confirmed earlier reports that the first launch is scheduled for 2010, saying it will take place in the second quarter.

The Russian and French space agencies Roscosmos and CNES on Monday approved a plan of joint work for 2010 as part of a cooperation program on new carrier rockets.

Medvedev's visit to France will end Wednesday. He has been accompanied by a delegation of 80 Russian business leaders, with officials predicting before the visit that around 10 major deals would be signed during the trip.

Russia's Gazprom and GDF Suez signed a memorandum Monday on the French utility taking a 9% stake in the Nord Stream gas pipeline project to pump Russian gas to Germany under the Baltic Sea.

Under the deal, the 20% shares of the two German partners, Wintershall Holding and E.ON Ruhrgas, will be reduced, but Gazprom's 51% stake and the 9% held by Dutch Gasunie will not be affected.

He said two of the four Mistral-class ships under discussion could be built in Russia. The announcement of the talks confirmed earlier comments by a Russian Defense Ministry source that the sale would not be finalized during Medvedev's visit.

A Mistral-class ship is capable of transporting and deploying 16 helicopters, four landing barges, up to 70 vehicles including 13 battle tanks, and 450 soldiers. The vessel is equipped with a 69-bed hospital and can be used as an amphibious command ship.