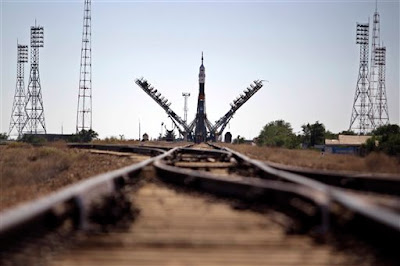 BAIKONUR, Kazakhstan — A Russian rocket set to carry a three-person U.S.-Russian crew to the international space station was moved Sunday to a launch pad in preparation for blastoff.

The rocket will carry U.S. astronauts Douglas Wheelock and Shannon Walker and Russia's Fyodor Yurchikhin to the international orbiting laboratory on Wednesday for a mission lasting about six months.

Under the Central Asian sun, a train carrying their Soyuz booster rocket rolled on a flatbed train Sunday through tinder-dry steppe on its way to the launch pad known as Gagarin's Pad. It is the site from which the Soviet Union sent off Yuri Gagarin in 1961 to become the first human in space.

In accordance with local tradition, the Soyuz carrier rocket began its slow rollout to the site in southern Kazakhstan at exactly 7 a.m. local time (0100 GMT) Sunday. As the train crossed a junction, it flattened coins laid down by well-wishers to keep as mementos of the mission.

U.S. reliance on the venerable Soyuz rocket is set to increase from next year with the shuttle program coming to an end.

Wheelock, Walker and Yurchikhin will be onboard the space station to see the final shuttle — the Endeavour — depart from its last planned mission to the lab in November before the fleet is finally retired.

Wheelock, a U.S. Army colonel, is returning to the space station for the first time since his two-week stint on the Discovery in late 2007, when he and his colleagues earned plaudits for their work repairing an power generation facility.

The three-person crew will join Russian commander Alexander Skvortskov, NASA flight engineer Tracy Caldwell Dyson and Russia's Mikhail Kornienko, who have been on the orbiting laboratory since April.

With the rocket in place, final preparations can start and will be completed just hours before the nighttime blast off early Wednesday.

A Progress cargo carrier is also due to arrive at the orbiting lab later this month.

Copyright © 2010 The Associated Press. All rights reserved.
Posted by Bayourat Rocketry at 10:22 AM