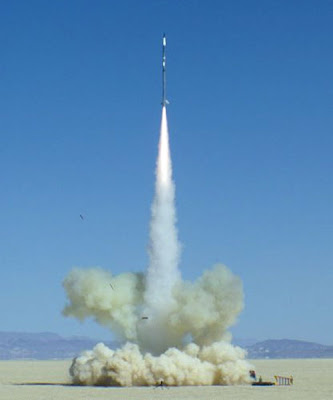 Industry News by Planet News
Tuesday, September 28, 2010
The Proteus 6.5 rocket was launched from the Black Rock dry lake bed in northwest Nevada on 9/25/2010. Photo: Scott Kormeier. BLACK ROCK DESERT, Nevada USA — On Saturday, an amateur rocket built by Curt Newport and Loki Research's Jeff Taylor soared in excess of 70,000 feet into the brilliant blue Nevada skies above the Black Rock Desert floor just outside of the town of Gerlach.

Dubbed the Proteus 6.5, the minimum diameter P-motored flew to an altitude of 72,000 feet and was successfully recovered due to the use of modern tracking technology.

On board were GPS telemetry electronics as well as a video camera, the results of which will be featured in an upcoming issue of ROCKETS Magazine, the sponsor of the on board video camera. The video of the flight will also be made available on the ROCKETS Magazine BALLS19 DVD set when it is released.

"There are many people Curt and I want to thank," Jeff Taylor said in his announcement. "Thanks to Dave Leininger and his cohorts for vital assistance with the launch pad. Thanks to Darren Wright for use of his tracking transmitter. And a big thanks to Steve and Janice Hamblin for putting us up in Reno. I'm sure I'm leaving some people out, but know that your assistance was appreciated and I will thank you more properly after I recover a bit."

This is a still image taken from the on-board video during the flight of the Proteus 6.5 rocket at approximately 72,000 feet ASL. A still image taken from the Proteus' in-flight video near the 72,000 apogee shows a breath taking view of space and the curvature of the earth. The large body of water visible in the image at the lower right is Pyramid Lake. The on-board GPS telemetry payload transmitted position data during the flight and made recovery of the rocket quite easy. 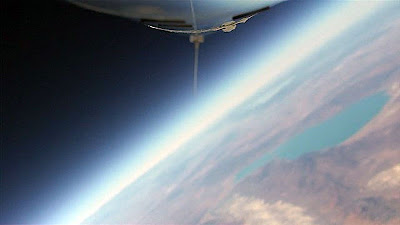 The Tripoli Rocketry Association's BALLS launches are considered the premiere experimental rocket launches in the continental United States, held in the wide expanse of the Black Rock Desert, near Gerlach, Nevada. This year's event, held September 24th-26th, 2010, brought together dedicated rocketry enthusiasts devoted to the leading edge of non-professional experimental rocketry.
Posted by Bayourat Rocketry at 10:24 AM