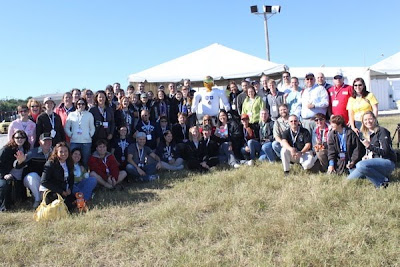 Wow, words cannot describe what I have been through this week. I'll try to explain but my head is still spinning from the emotional rollercoaster that we call "human spaceflight". I arrived at KSC last Saturday to attended a Tweetup held by NASA for the social networking site Twitter. I met many people and was introduced to may new technologies. Including 3D video recording in HD. I had a live video stream going on Ustream. There was so much going on outside of the launch (or lack there of) Space Shuttle Discovery on STS-133. As most of you may know already the launch was ultimately scrubbed due to a 8 inch crack in a 17" pipe quick disconnect fitting on the gaseous hydrogen vent line. This is going to require a roll back and tank changeout. Big problem. We had some great tours of the entire KSC including the VAB, Shuttle landing facility, Launch Pads, and the regular stuff like the Saturn V center and visitors center. I also went to the Astronauts Hall of Fame and an Aircraft Museum. There were 2 astronauts that spoke to us and a demonstration of Robonaut 2 a humanoid robot. We also got a demonstration of the ACES suit and I got to try on a glove from the suit. Here is a cool 360 degree photo taken with all the Tweeps and Robonaut 2. (360 Photo) See if you can find me. Hint: I'm the one with the Saints hat on. Also check out the guy with the iPhone on his hat. He was streaming video the whole time.

It's good to be back home and I am looking forward to returning for the actual launch now scheduled for Nov. 30, 2010.

Here are a few links to news stories on the tweetup:
This Week At NASA
Professors Win NASA Tweetup to View Shuttle Launch
Posted by Bayourat Rocketry at 10:44 PM