How To Move A Secret Space Plane? With A Chevy Truck Of Course! 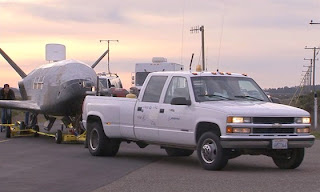 Photos by Boeing
Last week, the U.S. Air Force's X-37B unmanned space plane landed at Vandenberg Air Force Base in California after completing a top-secret 220-day orbital space mission. It was towed from the runway by a 1994-1998 Chevrolet C/K 3500.


The X-37B resembles the U.S. space shuttle, but it's only a bit larger than a heavy-duty pickup truck. It weighs about 11,000 pounds and has a cargo bay that measures about 7 feet by 4 feet.

Based on pictures released by Boeing, the one-ton GMT 400 Chevy dually used to tow the X-37B to a secure hangar probably has the old 230-290 horsepower, 454-cubic-inch (7.4-liter) big-block V-8 gas engine because the 6.5-liter V-8 diesel would have had two air inlets in the front bumper. The HD pickup appears to have a custom high-low conventional hitch adapter hooked up to a dolly that guides the X-37B's landing gear.

The X-37B might be the most expensive object ever towed by a heavy-duty pickup. 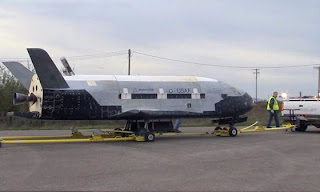 Posted by Bayourat Rocketry at 7:53 PM