ATV Johannes Kepler operating flawlessly. After a spectacular launch viewed from the ISS 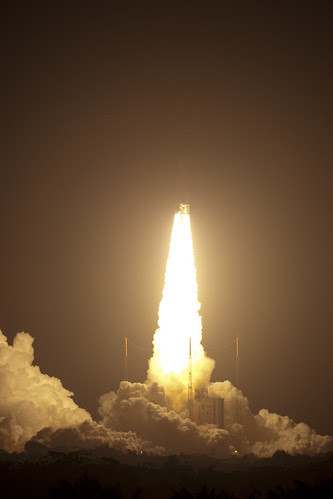 ATV Johannes Kepler was launched today at 22:50:55 CET by an Ariane 5 to dock with the ISS
ESA’s second Automated Transfer Vehicle, was launched today evening from Europe’s Spaceport in Kourou, in French Guiana, at 22:50:55 CET by an Ariane 5 to deliver critical supplies and reboost the International Space Station. ATV Johannes Keplerwill dock with the Space Station on Wednesday, 23 February, and stay in orbit for almost four months. 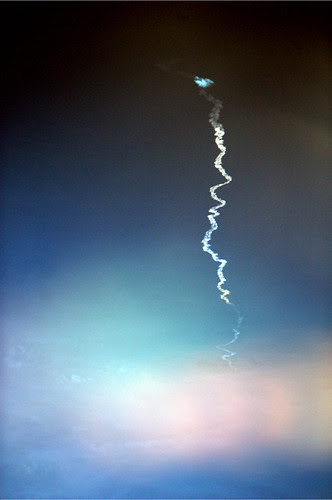 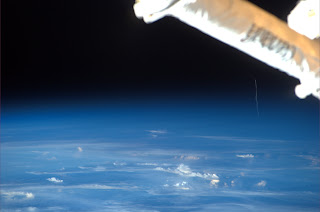 These remarkable photos were taken by ESA astronaut Paolo Nespoli from the ISS on 16 February 2011, just minutes after ATV Johannes Kepler lifted off on board an Ariane 5 from Kourou at 22:50 UTC. It shows the rising exhaust trail of Ariane, still in its initial vertical trajectory. The trail can be seen as a thin streak framed just beneath the Station's remote manipulator arm.

16 February 2011
ESA PR 07-2011 - ESA’s second Automated Transfer Vehicle, Johannes Kepler, has been launched into its targeted low orbit by an Ariane 5. The unmanned supply ship is planned to deliver critical supplies and reboost the International Space Station during its almost four-month mission.

The launcher and its 20.06-tonne payload flew over the Atlantic towards the Azores and Europe. An initial 8-minute burn of the upper stage injected it, with Johannes Kepler, into a low orbit inclined at 51.6 degrees to the equator.
After a 42-minute coast, the upper stage reignited for 30 seconds to circularise the orbit at an altitude of 260 km. About 64 minutes into flight, the unmanned supply ship separated safely from the spent upper stage.

The Automated Transfer Vehicle (ATV) deployed its four solar wings soon after and will proceed with early orbit operations over the coming hours to begin its climb to the International Space Station (ISS).

Booster jettison of the V200
“This launch takes place in a crowded and changing manifest for the ISS access, with HTV, Progress, ATV and the Shuttle coming and going. In October last year we had fixed the ATV launch schedule with our international partners,” said Jean-Jacques Dordain, ESA’s Director General, “and we could keep that schedule thanks to the expertise and dedication of the European industry and Arianespace, of ESA and CNES teams and of our international partners. ATV-2 is the first of a production of four and this new step is the result of technical expertise and political support from Member States to ESA and to international cooperation. We are now looking for the docking to ISS to declare success.”

For the first time, ESA used a special access device to load last-minute cargo items. “This late access confirms ATV’s role as a critical resupply vehicle for the Space Station,” she said.

“Right now, integration for the next vehicle in line, Edoardo Amaldi, will be finished in Europe in August 2011, and production is under way for ATV-4 and -5.” Mrs Di Pippo confirmed that “Edoardo Amaldi is planned for launch in about 12 months. The other two will follow by 2014.”

Flying in the same orbital plane as the Station but well below its 350 km-high orbit, ATV is being constantly monitored by the dedicated ESA/CNES ATV Control Centre (ATV-CC) in Toulouse, France, in coordination with the ISS control centres in Moscow and Houston.

During the coming week, ATV will adjust its orbit to rendezvous with the ISS for docking on Thursday, 24 February.

Unlike its 2008 predecessor, ATV Jules Verne, ATV Johannes Kepler will not perform practice demonstration manoeuvres. Instead, it will dock directly and autonomously with Russia’s Zvezda module to deliver cargo, propellant and oxygen to the orbital outpost.

The ATVs are contributing to the support and maintenance of the ISS together with Russia’s Progress and Japan’s H-II Transfer Vehicle, the second of which is now docked to the European-built Node-2.

These three independent servicing systems provide a secure logistics lifeline, while NASA’s Space Shuttle is going to be phased out later this year.

Now in its fourth decade of service, Europe’s family of launchers has lofted some 330 payloads to Earth orbit and beyond. Among these, 31 were for ESA, including deep-space probes, astronomical observatories, meteorology, remote sensing and communication satellites, as well as Space Station resupply ships.