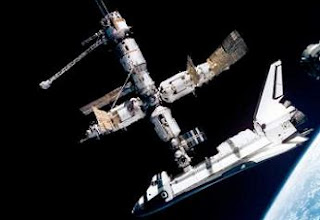 February 10th, 2011 by Pete Harding
NASA managers are investigating a proposed plan that would see a Soyuz spacecraft undock from the International Space Station (ISS) during the upcoming STS-133 mission in order to take photographs of the orbital outpost, along with its record number of attached Visiting Vehicles (VVs) and the docked Space Shuttle Discovery.

Read More
From: http://nasaspaceflight.com/
Posted by Bayourat Rocketry at 11:34 AM