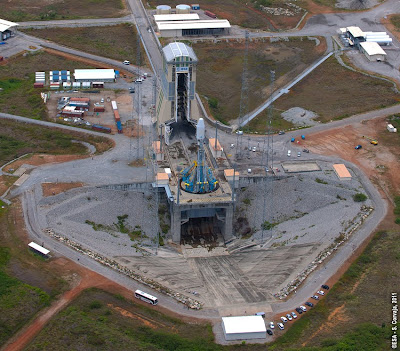 A ceremony was held on Saturday, May 7 at the Soyuz launch complex (ELS) at the Guiana Space Center (CSG) in French Guiana, as Jean-Yves Le Gall, Chairman and CEO of Arianespace, received the “keys” to the launch complex from Jean-Jacques Dordain, Director-General of the European Space Agency (ESA). Also attending the ceremony were Yannick d’Escatha, President of French space agency CNES and Vladimir Popovkin, head of Russian space agency Roscosmos.

This major milestone was the culmination of the operational qualification procedure over the last few days. A Soyuz launcher was transported horizontally to the Launch Zone, then erected, with the upper composite being raised and mated to the lower three stages on April 30. 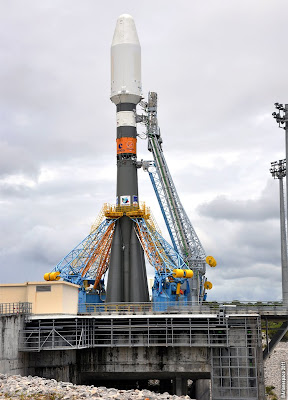 Two simulated launch countdowns were carried out, validating ELS facilities with the launcher present. Both facilities and personnel are now ready for the first launch campaign. Slated for this coming October, the first Soyuz at CSG will launch, on behalf of ESA, the first two satellites in the Galileo satellite positioning system.

Operated alongside the Ariane 5 heavy launcher and Vega light launcher at the Guiana Space Center, Soyuz will round out ESA’s family of launch vehicles, operated by Arianespace, which can now offer launch solutions for all types of missions.

After the handover ceremony, Jean-Yves Le Gall said: “This is a great day for Europe, Russia and Arianespace. I would like to express my thanks to ESA, CNES and Roscosmos for their remarkable work. Soyuz at the Guiana Space Center gives us an extraordinary tool, enabling Arianespace, more than ever, to meet the full range of requirements for all of our customers.”

Soyuz at CSG is a programme of the European Space Agency (ESA). The programme, strongly supported by the French Space Agency, CNES, is opening a new chapter for European launchers and consolidating European access to space for medium-sized satellites.

Arianespace is the world’s leading launch service & solutions company, providing innovation to its customers since 1980. Backed by 21 shareholders and the European Space Agency, Arianespace offers an unrivalled family of launchers, comprising Ariane 5, Soyuz and Vega, and an international workforce renowned for a culture of commitment and excellence. As of 25 April 2011, Arianespace had launched with Ariane launchers a total of 292 payloads, including more than half of all the commercial satellites now in service worldwide. It has a backlog of 19 Ariane 5 and 18 Soyuz launches, equal to more than three years of business.
Posted by Bayourat Rocketry at 11:58 AM