SBIRS GEO 1 To Launch May 6, 2011 On An Atlas V Rocket From Canaveral Air Force Station 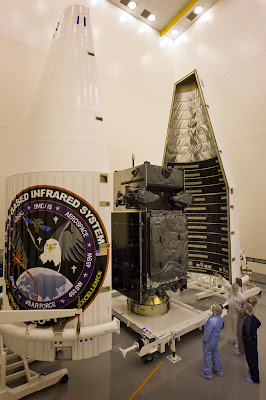 The GEO-1 satellite includes highly sophisticated scanning and staring sensors that will deliver enhanced infrared sensitivity and a reduction in area revisit times over the current constellation. The scanning sensor will provide a wide area surveillance of missile launches and natural phenomena across the earth, while the staring sensor will be used to observe smaller areas of interest with enhanced sensitivity. When GEO-1 is launched, declared operational and its data is fused into the current constellation, SBIRS will deliver unprecedented, global, persistent, taskable infrared surveillance capabilities to the warfighter, nation and allies for decades to come.

Headquartered in Bethesda, Md., Lockheed Martin is a global security company that employs about 126,000 people worldwide and is principally engaged in the research, design, development, manufacture, integration and sustainment of advanced technology systems, products and services. The Corporation's 2010 sales from continuing operations were $45.8 billion.