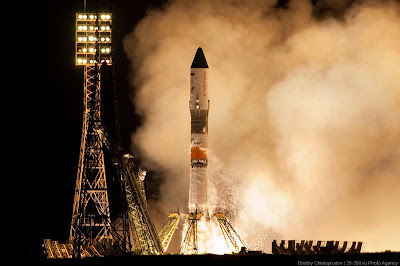 A Russian freighter bound for the International Space Station (ISS) disintegrated over Siberia after failing to separate from the third stage of its Soyuz-U carrier rocket.

The failure apparently occurred approximately 325 seconds into the flight after the Soyuz-U launched from the Baikonur Space Center in Kazakhstan.

"At 5:25 p.m. Moscow time [13:25 GMT] we received information about falling wreckage from the M-12M space freighter," the official confirmed.

Meanwhile, the head of the South Siberian republic's Choya District said a "powerful blast" was heard within a 100-km radius.

Although the freighter failed to make its rendezvous with the International Space Station, the BBC reports the crew has plenty of supplies on board, as last month's shuttle flight delivered enough stores to maintain a six-person crew for a year.

It should be noted that the Progress M-12M is the second spacecraft loss for Russia within a single week. On August 18, the Express AM-4 telecommunications satellite failed to separate from its Proton-M carrier rocket.

With no American space program to backup the Soyuz rockets. In the event Soyuz is grounded the entire ISS program is in jeopardy.
Posted by Bayourat Rocketry at 11:32 AM