NASA's Current Program Called An "Embarrasment" By Neil Armstrong! "The Space Program To No Where" 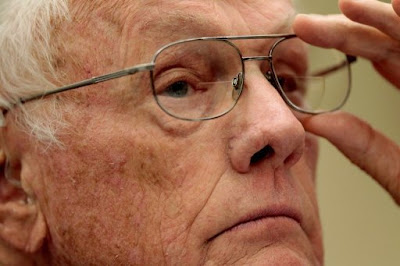 WASHINGTON — Neil Armstrong, the first man to walk on the moon, told lawmakers Thursday that the end of the space shuttle era has left the American human spaceflight program in an "embarrassing" state.

"We will have no American access to, and return from, low Earth orbit and the International Space Station for an unpredictable length of time in the future," Armstrong told the House Committee on Science, Space, and Technology.

"For a country that has invested so much for so long to achieve a leadership position in space exploration and exploitation, this condition is viewed by many as lamentably embarrassing and unacceptable."

Armstrong was part of a four-member panel of space experts who told lawmakers that NASA needs a stronger vision for the future and should focus on returning humans to the Moon and to the International Space Station.

"A lead, however earnestly and expensively won, once lost, is nearly impossible to regain," said the US astronaut, now 81, who was commander of Apollo 11 and walked on the Moon in 1969.

President Barack Obama canceled the Constellation program that would have returned humans to the Moon and called on NASA to instead focus on new, deep-space capabilities to carry people to an asteroid by 2025 and Mars by 2030.

The retirement in July of the three-decade-old space shuttle program brought an end to the US capability to send humans to space until private industry can come up with a new commercial space capsule to the ISS, maybe by 2015.

In the meantime, Russia's Soyuz capsules are the only taxis for the world's astronauts heading to low-Earth orbit, and a ticket to the ISS costs global space agencies between 50 and 60 million dollars each.

"Get the shuttle out of the garage down there at Kennedy (Space Center), crank up the motors and put it back in service," said Eugene Cernan, who commanded the Apollo 17 flight and was the last man to walk on the Moon in 1972.

"You want a launch vehicle today that will service the ISS? We've got it sitting down there. So before we put it in a museum, let's make use of it. It's in the prime of its life, how could we just put it away?"

Cernan hailed the vision of John F. Kennedy, "a bold and courageous president who started us on a journey to the stars," and said thousands of Americans have been inspired by the space race with the Soviet Union.

"Today, we are on a path of decay. We are seeing the book close on five decades of accomplishment as the leader in human space exploration," Cernan said.

Cernan said Constellation has been replaced by a "mission to nowhere" and called on NASA to make plans to return to the Moon.

"As unimaginable as it seems, we have now come full circle and ceded our leadership role in space back to the same country -- albeit by a different name -- that spurred our challenge five decades ago."

He added: "I take no solace in the failure of the last Soyuz booster."

Due to technical problem with a Soyuz rocket in August, a Russian cargo ship failed to reach orbit and crashed back to Earth, prompting Russia to temporarily ground a part of its Soyuz program to do emergency checks.

Armstrong and others on the panel appeared to favor the unveiling earlier this month of a massive new launcher capable of powering manned space flights well beyond low-Earth orbit, the Space Launch System, which NASA called the most powerful rocket since the Saturn V rocket put US astronauts on the moon.

Maria Zuber, principal investigator on NASA's unmanned GRAIL (Gravity Recovery and Interior Laboratory) mission that launched earlier this month to orbit the Moon, said lunar study is valuable, but noted that her students are inspired by the notion of exploring Mars.

"The goal of human exploration of Mars is also the consensus opinion of the next generation who will carry out this challenge," she said.

"Unfortunately Congress is cutting back NASA's advanced technology work and it is not clear how the agency will be able to unfold new advanced missions without a more concentrated effort to develop new technologies.

Michael Griffin, professor of mechanical and aerospace engineering at the University of Alabama in Huntsville, raised concerns about a new space race and called China, which wants to put a robot on the Moon in 2013 and build its own space station for 2015, "a near-peer competitor."

"When the Chinese can reach the Moon and we cannot, I do not see why any other nation would regard us as a world leader," he said.
Posted by Bayourat Rocketry at 10:38 PM