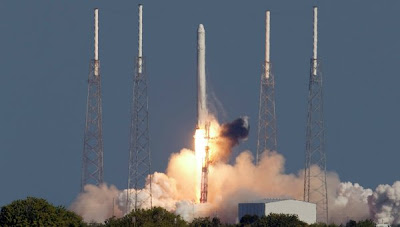 MISSION CONTROL (Moscow region), September 16 (RIA Novosti)
The U.S. private space capsule Dragon will conduct a flight near the International Space Station (ISS), but docking between them is not planned, Vladimir Solovyov, head of the Russian segment of the ISS mission control center said on Friday.

The California-based Space Exploration Technologies company, better known as SpaceX, has earlier announced plans to launch its Dragon capsule toward the orbiting lab on November 30, with a historic docking slated for nine days later.

"Over the last several months, SpaceX has been hard at work preparing for our next flight - a mission designed to demonstrate that a privately-developed space transportation system can deliver cargo to and from the International Space Station (ISS)," the company said.

"A flight by the Dragon to the ISS, but without berthing, has tentatively been scheduled for the end of this year. Though, I do not know, whether it'll fly or not," Solovyov said.

SpaceX and other companies have been given funds out of NASA's special commercial package to provide cargo resupply and human spaceflight capabilities. SpaceX, widely considered to be the front runner in this endeavor, has already sent its Dragon capsule into orbit, proving that its space launch infrastructure is viable.

Earlier Russia said it will not allow the SpaceX vehicle to dock with the ISS unless its safety is fully tested.

"We will not issue docking permission unless the necessary level of reliability and safety is proven," said Alexei Krasov, head of the human spaceflight department of Roscosmos. "So far we have no proof that this spacecraft duly comply with the accepted norms of spaceflight safety."
Posted by Bayourat Rocketry at 10:15 AM