Have You Ever Wondered What The X-37b Has Been Doing On Orbit? 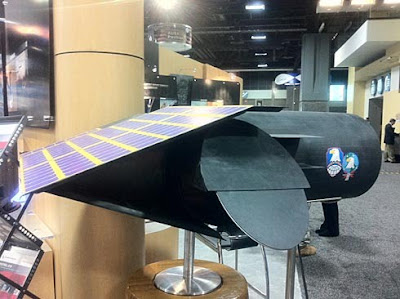 It’s called NanoEye and it’s basically a prototype for a tiny class of spy satellite that the Army hopes to develop.

The 20 kilogram NanoEye is meant to be cheap, maneuverable and able to take high-resolution pictures for small ground units in combat — kind of like the micro UAVs that are used by infantry units to provide near instant overhead ISR for troops in the field.

In theory, ground troops will control NanoEyes and receive images from the satellites on laptops or radios within ten minutes of asking one of the tiny satellites to take a picture, according to an Army fact sheet that was being given out next to the display.

The intent is to demonstrate a tactical space-based imagery microsat that, due to its low production cost, could be proliferated in large numbers to provide a persistent capability to ground forces –particularly to the dismounted
Warfighter. The primary objective of the demonstration will be to show the on-orbit maneuverability and tasking of the satellite to take a picture of a designated ground object of interest and have that image relayed back to the ground
Warfighter during the same satellite pass (i.e., less than a10-minute tasking-to-product cycle).

Pretty cool. It could be very useful in environments where weather or the need to remain completely hidden from the enemy prevent ground troops from launching a small drone. Imagine clouds of these things waiting above warzones, ready to take satellite pictures on demand. The big question is, how do you get them into orbit cheaply, the X-37B?