An Editorial Summary Of The LDRS Show 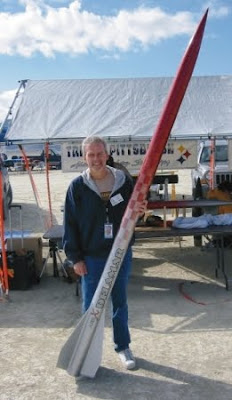 An Editorial  By: Ken Good

"For five days, more than 2,000 rockets burst into the sky with a billow of smoke, racing thousands of feet straight up in a matter of seconds. In fact, the FAA has no choice but to divert all air traffic around the entire event!"

Hmmm.. OK, right. That blurb is from the Disc Channel's web page covering LDRS. We all know the facts around the second statement are a bit different.

Orwell once said, "Early in life I had noticed that no event is ever
correctly reported in a newspaper." No doubt even he would be amazed at how much this tendency is amplified by modern media. All one has to do is watch what passes for "history" on the History Channel, or "news" on almost every major news channel/network out there. Once you know just a bit of the real facts, what passes for factual information out there can be pretty scary.

I saw only part of this current show, because I was immersed in an actual rocket project and sort of forgot it was on. Much of what I saw made me wince, like it did so many of us. Yes, the show's premise is fiction, but the people on it are not. The enthusiam isn't ficititious, and even some of the rocket science portrayed isn't either. I've skimmed through our debates and yea/nay verdicts on this topic. But in the end, it's the mixed-bag, fact/fiction outcome that I knew it would be when I got a call on my cell phone from the DiscChan producer about three years ago, asking if we would be interested in a new show about high power rocketry. I answered affirmatively, the BoD agreed, and I got to hand off the heavy lifting to Dick, Bruce, Pat and many others.

So feel free to curse or credit me with getting the ball rolling on this effort, and yes I feel a bit like Dr. Frankenstein after the monster got loose and started to rough up the locals. But the product has to be taken in the context of what's being offered as educational material on the fast-food edu-networks these day, and the positives we accrue accepted despite the noise of some silliness and utter fiction.

Posted by Bayourat Rocketry at 10:03 PM