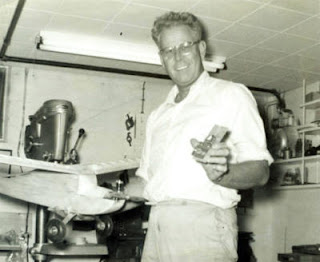 A contemporary and New Mexico colleague of legendary rocketry pioneer Robert Goddard and Pluto's discoverer Clyde Tombaugh, Randall's career as a rocket engineer stretched from the 1930s through World War II and late 20th century space program research, and included duty as chief test engineer with the U.S. Naval Research Station at Annapolis, Md., and work with corporate and governmental programs throughout the U.S. to develop and test cutting-edge technology for a series of rockets, aircraft and intercontinental ballistic missiles, before his 1978 retirement from White Sands Missile Range.

"I first met him in 1950 and admired him so much, I wrote a biography of him," said Gold, an engineer and author of "Lowell Randall: Rocket Pioneer."

In 1930, Randall was a student at Roswell High School when Dr. Robert Goddard moved his rocket development and testing activities from Massachusetts to the Mescalero Ranch near Roswell.

In the depths of the Great Depression, Randall couldn't afford any education beyond his high school diploma and a spot on Goddard's rocket research dream seemed unlikely, if not impossible. He supported his wife, Helen, and their
first child by delivering newspapers and working for a furniture store. He met Goddard while installing carpets and drapes in the famed scientist's Roswell home. Randall shared his aspirations for a rocketry research job and got Goddard's attention with a prototype of a gyroscope that could sense an aircraft's speed.

Randall's dream job finally materialized when Goddard received contracts from the U.S. Navy Bureau of Aeronautics and the Army Air Corps to develop liquid Jet Assist Take Off (JATO) rocket engines, which laid the foundation for spaceflights to the moon. Lowell became the Goddard team's chief test engineer at the Naval Research Station at Annapolis.

In a 2004 interview with Deseret News, Randall called Goodard "a wonderful boss. He was in good spirits all the time, amazingly good spirits - but extremely secretive," about his work, outside of his small research team.

"We all worked as a team and exchanged ideas. There were no secrets among any of us. But we had an understanding, and Mrs. Goddard made that clear to me my first day, 'You do not talk to the outsiders, you don't say a word to the outsiders,'" Randall said.

After Goddard's death in 1945, Randall moved with the team to work with Curtiss Wright Corporation at Caldwell, N.J.

There, he helped "develop the rocket engine for the Bell X-2 aircraft, which achieved a maximum speed of Mach 3.2 during a test flight at Edwards Air Force Base in California," according to www.thespaceshow.com. "Lowell moved to the White Sands Proving Ground, later named the White Sands Missile Range (WSMR), in New Mexico in 1952 to test Redstone rocket engines, and he later took over a 600-man team at Martin Marietta Corporation near Denver, Colo., to test the first 10 rocket engines for the Air Force's Titan I intercontinental ballistic missile," the first true multi-stage intercontinental ballistic missile and one that could also serve for space flights.

"In a modified form, the Redstone Missile sent the first American astronauts into space," according to information provided by the Randall family.

In 1967, Randall returned to Las Cruces to head up environmental missile testing at WSMR, retiring in 1978, but continued part-time engineering work until the mid-1990's, primarily with Wendell Hull in Las Cruces.

"Those heady days with Goddard catapulted Randall into a career that brought him to the top of the American space program. He helped design systems on the Redstone rocket that took astronauts on suborbital hops. He wrangled with Werner von Braun and won. And he headed teams working on vital military space projects," journalist Joe Bauman of Deseret News said.

In his later years, Gold said, Randall continued consulting work, focusing on improvements for the specific impulse of rocket motors and often spoke at New Mexico State University and other educational institutions.

"He was generous in letting many of us pick his brain," Gold said.

Randall, born in Roswell in 1916 to Orlando and Maude Randall, was also known for his hobbies, flying radio-controlled model airplanes and gliders.

He is survived by daughters Martha Randall Brown of Las Cruces and Linda L. Randall and husband Gerald Hazelbauer of Columbia, Mo., by step-daughter Carol Miner Garber and husband John of Denver, Colo., and by caregiver Mary Grimes of Las Cruces.

Donations can be made to maintain the replica of the Goddard Workshop at the Roswell Museum and Art Center. Send donations to: