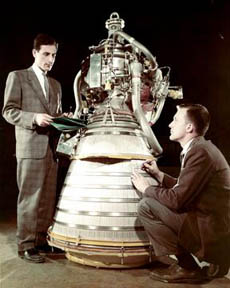 The venerable U.S. upper stage rocket -- the Centaur -- that created the pathway to the Moon and every planet across the solar system will be making its 200th flight next Thursday in a milestone mission to boost the U.S. Navy's sophisticated new mobile communications satellite to orbit.

Originally developed by General Dynamics under the direction of NASA at the dawn of the space age, Centaur was conceived to power payloads with a high-energy cryogenic engine fed with liquid hydrogen and liquid oxygen.

"Centaur makes it possible for the U.S. to launch spacecraft of much greater size and weight then ever before," NASA said on the eve of the first launch in 1962. "Hydrogen offers more pounds of thrust per pound of propellant consumed per second than any other fuel possible in chemical rockets."

The stage was at the forefront of advancing rocket technology by conquering cryogenic fuels, a key accomplishment that benefited a host of different space boosters to follow.

"Centaur has been pioneering space launch for the last 50 years. The first launches in the early 1960s demonstrated the extremely high performance that can be achieved with a liquid hydrogen/liquid oxygen rocket stage. LH2/LO2 stages were subsequently used for the Saturn I, Saturn V, Space Shuttle, Titan and Delta programs," said Jim Sponnick, United Launch Alliance's vice president for mission operations.

"Centaur developed and flight demonstrated in-flight restarts for LH2/LO2 engines -- a technology that was critical for the Apollo programs and also for enabling a wide variety of flexible mission designs."

For more visit: SpaceFlightNow
Posted by Bayourat Rocketry at 5:30 PM