Mensch in the Moon: The Lost Story Of Abe Silverstein 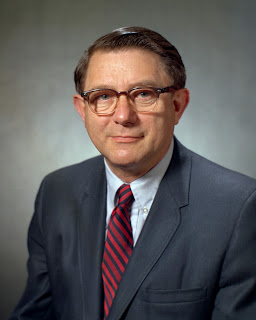 This article was first published by Jewish Ideas Daily (http://www.jewishideasdaily.com/) and is reprinted with permission.

Right now there are two Americans aboard the International Space Station, and their only way home is to hitch a ride in the Russians' Soyuz capsule, a ramshackle remnant of the 1960s. There's no space shuttle to bring them home because the shuttle's been retired; also retired are plans for an American return to the moon. The country seems to have lost its space ambition. But the future wasn't always so bleak.

In 1961, President Kennedy asked the nation to "commit itself to achieving the goal, before this decade is out, of landing a man on the Moon and returning him safely to the earth." The speech remains one of history's great throwings-down of the gauntlet; to humanity's enduring and pleasant surprise, the nation made it: on July 20, 1969 Neil Armstrong hopped from a lunar lander into soft, grey moon dust and announced that he had taken one small step. The nation was justifiably proud of itself. But it didn't realize what a big part of its pride in the moon landing was owed to an engineer named Abe Silverstein.

Abe Silverstein was one of the nation's foremost aerodynamics experts, and designed its first supersonic wind tunnel. The grandson of a rabbi, he founded a synagogue in Cleveland and organized a group to help Soviet Jews. He turned down a reward-promotion to head the Johnson Space Center in Houston; when asked what he wanted instead, he asked NASA to name its new Maryland space center for his deceased colleague Robert Goddard. He was one of the most respected men in the upper echelons of NASA, where he was renowned for being brilliant and a nice guy, and for making the moon landing possible. But today he's completely forgotten.

Not forgotten is Wernher Von Braun. If you haven't heard of Von Braun, you've probably heard about ex-Nazis working for NASA: Von Braun was their leader and these days many think of him as the man who put America in space.

During the war, Von Braun led the Nazi's rocket program from the Baltic Sea-side town of Peenemünde; in Germany he and his science cadre were known affectionately as the "Peenenümders." In Britain they were known (less affectionately) as the men blitzing London with V-2 rockets. The Peenemünders were good at their job and for eight months starting in late 1944, they killed several thousand Londoners and maimed several thousand more. As the Russian front approached Von Braun's compound, he took his team and surrendered to the U.S. rather than risk capture and torture by the Soviets. German scientists were the Second World War's party favor and Von Braun's boys were brought home to the U.S. and put to work bolstering America's own, fledgling rocket program.

Working for the army and bomb makers at heart, the Peenemünder's specialty was blowing things up. They made missiles for the Army, which the Army used to blow things up. They made rockets for NASA, and the rockets often blew up. They produced the Redstone, which was used by NASA to put its Mercury astronauts in space—in 1960, NASA launched its first Mercury-Redstone. The rocket lifted four inches off the pad before it fell abruptly back down, on its end, and remained upright. To the great surprise of everyone watching, it didn't blow up. And that signaled progress.

But not enough progress. By 1961 the Redstone was refined enough to put Alan Shepard in space, but still too weak to put a anyone in orbit; a month before Shepard's flight the Russians had orbited Yuri Gagarin. The nation was getting antsy. Twenty days after Shepard's flight, Kennedy made his "end of the decade" speech, and focus began to shift toward a rocket that would be powerful enough to carry men to the moon.

Kennedy said, in his speech, that he and NASA proposed to "develop alternate liquid and solid fuel boosters, much larger than any now being developed, until certain which is superior." Von Braun thought liquid was too risky. Abe Silverstein thought he was wrong. To the ex-Nazi's chagrin, the soft-spoken Jew took the position that since an engine fueled by liquids oxygen and hydrogen would be more powerful and efficient than an engine fueled by the liquid oxygen-kerosene formula Von Braun was pushing, it was worth inventing one. Von Braun dismissed Silverstein and his team as a "colony of artists," but Silverstein won and Von Braun was tasked with building the new engine into a rocket.

There followed 18 months of failure and a recommendation from Von Braun that the new engine be abandoned. Silverstein interceded; he and his team at NASA's Lewis Research Center fixed the new "Centaur" booster engine and the "Atlas" rocket that carried it, and a year later the first Atlas-Centaur launch took place. The new design was used for the upper stage of Apollo's rocket and became "America's workhorse in space." Silverstein was then Director of Space Flight Programs and the Apollo journey to the moon was his baby, so to speak. "Apollo" was the name he chose for it.

But you can argue that Silverstein's greatest contribution to manned space flight took place nine years before Apollo 11 and four days before Kennedy asked the nation to put a man on the moon. Vice President Johnson, worried about getting space funding through congress, asked NASA administrator James Webb to come up with something big to get people excited. Webb asked Silverstein.

"We can go to the moon," said Silverstein. Webb asked how long that would take. Silverstein took a minute to do some calculations, and told him "we can do it by the end of the decade."

Josh Gelernter is a student at NYU, and (by all accounts) a good person. Much of this piece relies on research done by Samuel Kurinsky.
Posted by Bayourat Rocketry at 11:59 AM