NASA’s planetary science division would shoulder a heavy share of the cut. Under the president’s proposal, its budget would drop from $1.5 billion to $1.2 billion, a 20 percent reduction. 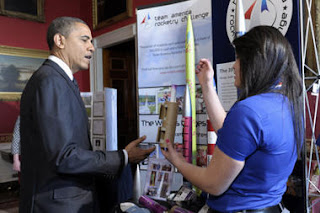 President Barack Obama talks with Ana Nieto in the State Dining Room of the White House in Washington, on Feb. 7, for the White House Science Fair. Nieto successfully competed in a number of rocketry challenges and has attended the NASA Student Launch Initiative Advanced Rocketry program. Obama hosted the second White House Science Fair celebrating the student winners of a broad range of science, technology, engineering and math competitions from across the country.


President Barack Obama will ask Congress for $17.7 billion for NASA for 2013, an amount that would leave the agency funded at its lowest level in four years, according to sources familiar with the forthcoming budget proposal.

Due on Capitol Hill Feb. 13, the $17.7 billion NASA budget proposal represents only a slight reduction from the $17.8 billion Congress approved in November for 2012. But compared to the $18.7 billion Obama penciled in for 2013 in the five-year budget he sent Congress this time last year, it represents a 5 percent cut.

Things could have been worse. According to a source familiar with the Obama administration’s internal budget deliberations, the White House Office of Management and Budget asked the agency last fall to submit budget proposals for three scenarios: a 5 percent cut, a 10 percent cut and a 15 percent cut, relative to the outyear spending plan submitted last year. With no top line budget relief, the cost overruns on NASA’s James Webb Space Telescope weighed heavily on the agency’s planetary science division, sources said. News of the 20-percent cut was first reported Feb. 8 by The Washington Post. A spate of news stories about the deep cuts in store for NASA’s popular robotic Mars exploration program followed.

Rep. Adam Schiff (D-Calif.), a House Appropriations Committee member whose Pasadena, Calif., district is home to NASA’s Jet Propulsion Laboratory, which specializes in executing planetary missions, issued the following statement Feb. 9 following a meeting with NASA Administrator Charles Bolden: "As I told the Administrator during our meeting, I oppose these ill-considered cuts and I will do everything in my power to restore the Mars budget and to ensure American leadership in space exploration."

Meanwhile, late Feb. 9, the White House directed federal agencies, including NASA and the U.S. Air Force, to cancel embargoed budget briefings with reporters that had been scheduled for Feb. 10. Administration sources said the White House did not give agencies a reason for canceling the briefings.

Budget briefings planned for today (Feb. 13) — many of them to be televised or webcast — are still going forward.

NASA is scheduled to roll out its budget in a televised briefing from the agency’s headquarters here at 2 p.m. EST (1900 GMT), the same time the Air Force is scheduled to brief reporters at the Pentagon on its 2013 spending proposal.

This article was provided by Space News, dedicated to covering all aspects of the space industry
Posted by Bayourat Rocketry at 8:07 PM