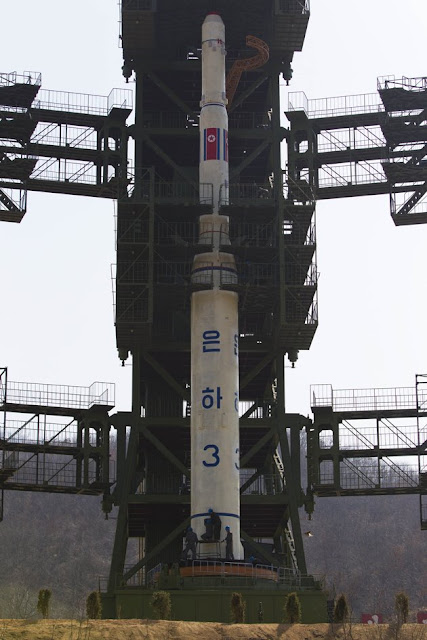 Foreign reporters in Pyongyang to cover the planned launch this week of North Korea’s Unha-3 rocket were given a tour of the Sohae launch facility on Sunday.

The launch pad, previously only see through the lens of satellite photos, was opened to the reporters a day after they arrived in North Korea.

CNN was part of a group taken to the Sohae Satellite Launching Station in Tongchang-ri, in the northwest part of the country.

North Korea announced last month that it would launch a rocket carrying a satellite between April 12 and 16 to mark the 100th anniversary of the birth of Kim Il Sung, the founder of the Communist state. His birthday on April 15, known as the "Day of the Sun," is a key public holiday in the North Korean calendar.

Pyongyang says the operation is for peaceful purposes, but Japan, the United States and South Korea see the launch as a cover for a long-range ballistic missile test.

North Korea prepares launch pad Firing the long-range rocket would breach U.N. Security Council resolutions, and Washington has suspended a recent deal to provide food aid to North Korea as a result. Japan has said it will shoot down any part of the rocket that enters its territory.

North Korea overshadows nuclear summit "If you look for yourselves with your own eyes, then you can judge whether it's a ballistic missile, or whether it's a launch vehicle to put a satellite into orbit," Jang Myong Jin, head of the launch site, said through a translator. "That's why we've invited you to this launch site."

Obama: 'No rewards for provocations' Journalists -- who were not allowed to take laptops or cell phones to the site, but were permitted to film -- were shown the control center and the satellite that officials said would be shot into space.

The rocket itself is 30 meters, or about 100 feet, long. It was white, with some red and blue paint.

International leaders have urged North Korea to cancel the launch, but Pyongyang has refused to back down, insisting that the operation is for scientific purposes.

The last time Pyongyang carried out what it described as a satellite launch, in April 2009, the U.N. Security Council condemned the action and demanded that it not be repeated.

An independent European analyst who visited the launch site said he saw nothing obvious that raised red flags.

"I don't know what they want to do in the future, but today what we see is a space launcher," said Christian Lardier.