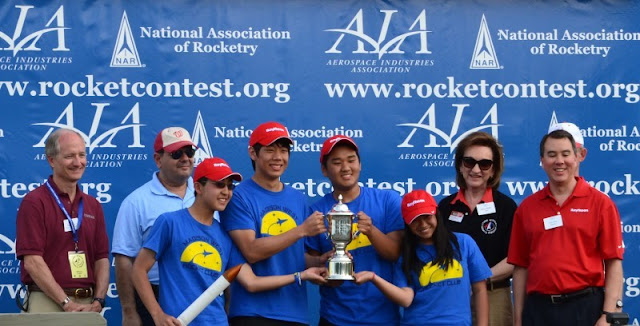 A team from Madison West High School blew away its rivals Saturday, winning first place — and a free trip to London — in the Team America Rocketry Challenge. The four-member team beat 99 others in the finals at the national competition held in The Plains, Va. The winning team gets an expenses-paid trip to London courtesy of Raytheon Company to compete in the July 15 Farnborough International Air Show. Contestants must design, build and launch a rocket that reaches exactly 800 feet during a 43- to 47-second flight. The payload, two raw eggs, must parachute to the ground undamaged. The West team earned a score of 12; a perfect score is zero. The next lowest score was 22. Two other West teams competed Saturday, with one placing 16th and the other 75th. Members of the winning team are sophomore Meng Lou and juniors Hanwook Chua, Tashi Aruktsang and Suzanne Hanle. The team’s faculty adviser is West biology teacher Christine Hager, and the mentor is software engineer Pavel Pinkas. This is the second time West won the national competition in its 10-year history. The contest, sponsored by the Aerospace Industries Association and the National Association of Rocketry, included 700 teams from 48 states, the District of Columbia and the U.S. Virgin Islands. "There is still work to be done to make our rocket even better, but we are thankful to have an incredible mentor and teacher who support us," Hanle said in a statement released by TARC. The aim of the competition is to encourage students to enter careers in science, technology, engineering and math.
Posted by Bayourat Rocketry at 9:19 AM