6 Hour Fast Track To Station Planned For Next Soyuz Launch 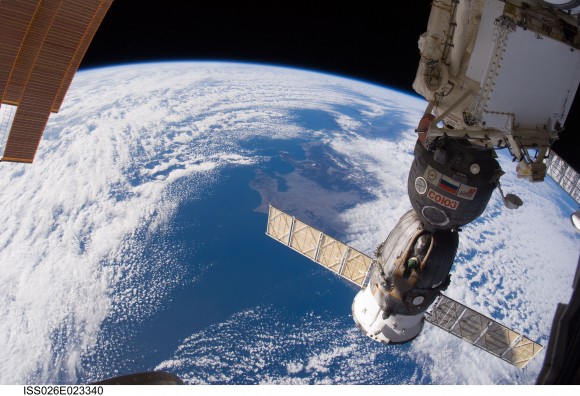 
The next Soyuz crew will be the first to try out the new abbreviated four-orbit rendezvous with the International Space Station. This relatively new, modified launch and docking profile for the Russian ships has been tried successfully with three Progress resupply vehicles, and now Roscosmos and NASA have agreed to try it on a human flight.

“We tried this approach on the cargo vehicles, and now we will try to do it on the manned vehicles,” said Sergei Krikalev, former cosmonaut, who now leads the Gagarin Cosmonaut Training Center near Moscow, speaking through an interpreter on NASA TV. “Now we have onboard new machinery and new software, so the vehicle is more autonomous, so it’s possible to do a lot onboard the vehicle and to calculate the burns so they don’t consume a lot of fuel.”

In the past, Soyuz manned capsules and Progress supply ships were launched on trajectories that required about two days, or 34 orbits, to reach the ISS. The new fast-track trajectory has the rocket launching shortly after the ISS passes overhead. Then, additional firings of the vehicle’s thrusters early in its mission expedites the time required for a Russian vehicle to reach the Station.

“The Soyuz is not the most comfortable vehicle to be in for an extended period of time,” said NASA astronaut Chris Cassidy who is part of the Expedition 35/36 crew who will make the first fast-track flight. “The toilet is right next to where you sleep which are right next to your buddy and eating and all; it’s like living for a day in a smart car or a Volkswagen Beetle….So the benefit to us is we get to the space station faster with the facilities that it offers, much more comfortable type of environment to be in and it also demonstrates some technology that’s useful in getting to the space station on that same day.”

One of the reasons given in the past for having the two-day or even three-day flight in the Soyuz was to allow the crew members time to get acclimated to being in a weightless environment. This new fast approach doesn’t allow for that, but Cassidy said he doesn’t think that thinking is really applicable, since the cramped Soyuz is so different from the voluminous space station.

“The adaptation of that I think is a little bit different,” he said. “You’re really not truly adapting in that day and a half. Two days on the Soyuz, that same adaptation that you’ll have once you get to the space station just because it’s a different perspective for your brain to get its arms around.”

The Soyuz took the first crew to the International Space Station in November 2000, and since that time, at least one Soyuz has always been at the Station, generally to bring the crews back and forth, but also to serve as a lifeboat should the crew have to return to Earth unexpectedly. Now that the space shuttles have been retired, the Soyuz is currently the only way for ISS crews to go to and from the Station. When there is a full crew of six on board, that means two Soyuz are docked at the ISS.

SpaceX is shooting for sometime in 2015 for the first crew flights of the Dragon to the ISS.