The Greatest Machine Ever Built 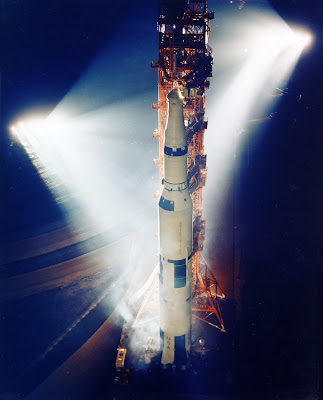 Forty Eight years ago (May 25, 1961) U.S. president John Kennedy announced the goal of landing Americans on the Moon by the end of the decade. Kennedy's ambitious speech triggered a nearly unprecedented peacetime technological mobilization and one result was the Saturn V moon rocket. Its development directed by rocket pioneer Wernher Von Braun, the three stage Saturn V stood over 36 stories tall. It had a cluster of five first stage engines fueled by liquid oxygen and kerosene which together were capable of producing 7.5 million pounds of thrust. Giant Saturn V rockets ultimately hurled nine Apollo missions to the Moon and back again with six landing on the lunar surface. The first landing, by Apollo 11, occurred on July 20, 1969 achieving Kennedy's goal. Bathed in light, this Saturn V awaits an April 11, 1970 launch on the third lunar landing mission, Apollo 13. 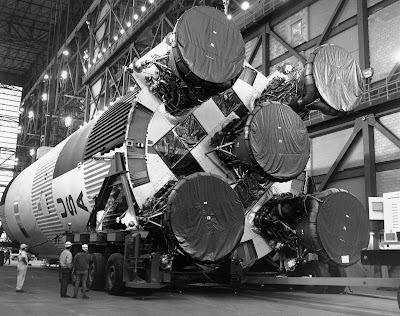 This 1967 photograph shows S-1C-8 (the first stage) of a Saturn V rocket at the Michoud Assembly Facility in Louisiana. MAF manufactured the stages of the Saturn IB and V, the rockets which powered the Apollo astronauts to the Moon. 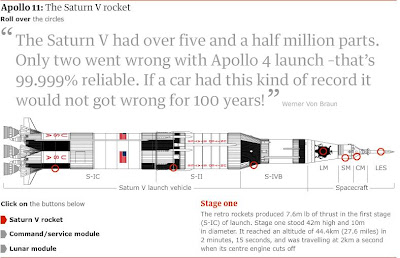 The first stage produced 7,500,000 pounds of thrust. It stood 138 ft. tall by 33 ft. in diameter. It reached an altitude of 27.6 miles (146,000') at 150 seconds into the flight. It weighted 5,017,000 lbs. (loaded) 289,900 lbs. (empty). It's 5 F1 Rocketdyne motors consumed it's 4,727,100 lbs. of liquid oxygen and kerosene during there two and a half minute burn. That's 3,357 gallons per second. Combined the engines turbopumps could empty an Olympic size swimming pool in 8.9 seconds. During testing at Stennis Space Center together the five engines were ignited in a test stand creating the loudest no-nuclear man made sound every. A single F1 engine produces more thrust then all three space shuttle main engines combined.


Posted by Bayourat Rocketry at 7:43 AM