The Next Step. The Second Stage. 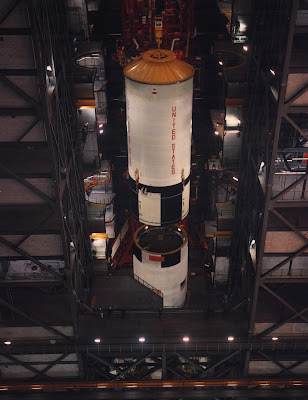 The second stage, S-II, would need about a million pounds of thrust and, if also powered by five engines, would call for the development of new 200,000-pound hydrogen-oxygen engines. When bids for the new J-2 engine were solicited, Pratt & Whitney with its ample liquid-hydrogen experience was a strong contender. But when all the points in the sternly controlled bidding procedure were counted, North American's Rocketdyne Division won again.
North American had been involved in the development of liquid fuel rocket engines since the immediate postwar years and the Navajo long range ramjet program. The engines it developed for the Navajo booster and their offspring later found their way into the Atlas, Redstone, Thor, and Jupiter programs. For the testing of these engines NAA's Rocketdyne Division had acquired a boulder-strewn area high in the Santa Susana mountains, north of Los Angeles, that had previously served as rugged background for many a Western movie. The Santa Susana facility would henceforth serve not only for the development of the new J-2 engine, but also for short duration "battleship" testing of the five-engine cluster of these engines powering the S-II stage. 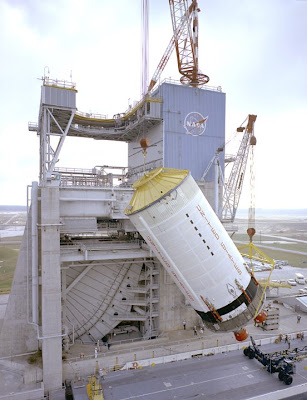 The second stage was designed to ignite 1 second after the burnout of the first stage. the rocket would be traveling at 6,000mph and at an altitude of 38 miles. The five J2 motors would burn for 6 minutes propelling the third stage, LEM, Command and Service Modules to an Altitude of 114.5 miles and a speed of 15,300 mph. At the time these were the most powerful Oxygen, Hydrogen motors ever built.

Despite the higher power offered by liquid hydrogen, Studies indicated that little would be gained by using it in the first stage also, where it would have needed disproportionately large tanks. (Liquid hydrogen is only one twelfth as dense as kerosene, so a much larger tank volume would have been required.) In all multistage rockets the upper stages are lighter than the lower ones. Thus heavier but less energetic kerosene in the first stage, in combination with lighter but more powerful hydrogen in the upper stages, made possible a better launch-vehicle configuration.

On Board Camera shot of First Stage Seperation

Posted by Bayourat Rocketry at 11:43 AM