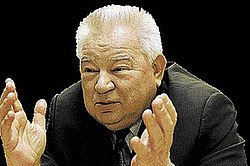 Georgie Grechko, age 78, is a Russian cosmonaut who flew three space flights: Soyuz 17, Soyuz 26, and Soyuz T-14. He also has a doctorate in mathematics and is a living legend in Russia. Grechko has gone on the record stating that he believes that UFO visitation is real and that aliens have in fact been visiting earth for thousands of years.
He currently devotes his time studying ancient megaliths which he believes are the work of UFO travelling aliens. He visited most of the world's great ancient stone structures such as Stonehenge and the Egyptian Pyramids.
Grechko believes that aliens will return to earth openly on December 22-23 of 2012 (The end of the Mayan calender) and is planning to meet them. He claims they will choose one of these ancient structures to land their space craft and he hopes to be there for the event.
Interestingly he proposes a theory that the aliens come from within our own solar system and reside on a yet undiscovered planet.
Source: Just Media
Posted by Bayourat Rocketry at 9:45 AM