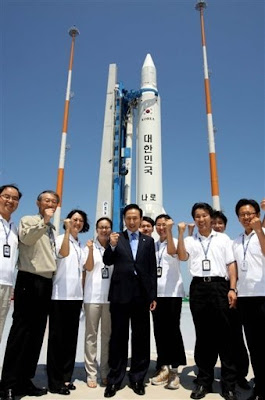 SEOUL — South Korea has rescheduled its first space rocket launch from its soil to August 11 after repeatedly postponing it due to technical reasons, officials said Saturday.
The Ministry of Education, Science and Technology said South Korea and Russia, a co-builder of the rocket, set the new launch date after talks.
"Both sides have set August 11 for blast-off," Kim Hong-Gab, a spokesman for the Korea Aerospace Research Institute affiliated with the ministry, told AFP.
He added weather conditions on the day would be "a decisive factor" to determine if the launch would go ahead as scheduled.
The previously-scheduled launch for around July 30 was postponed -- for a third time -- as Russians who had built the first stage of the Korea Space Launch Vehicle-1 called for more time for testing.
Blast-off had already been delayed from late 2008 to late June this year after China's Sichuan earthquake last year caused problems securing key parts.
South Korea plans to put a satellite weighing 100 kilograms (220 pounds) into a low earth orbit with the planned launch from the newly-built Naro Space Centre in Goheung, 475 kilometres (300 miles) south of Seoul.
South Korea is eager to join Asia's space race. In November 2007 it announced a plan to launch a lunar orbiter by 2020 and send a probe to the moon five years after that.
It unveiled the project one month after China launched its first lunar orbiter and two months after Japan.
In April last year Seoul sent its first astronaut into space aboard a Russian Soyuz rocket.

Posted by Bayourat Rocketry at 12:07 PM