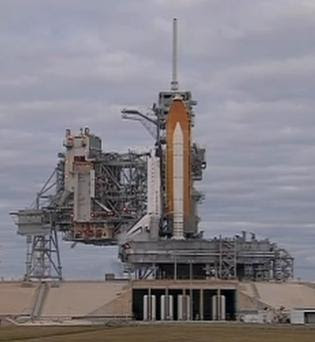 Today, Monday Nov 16th, at 1:28PM CST, Space Shuttle Atlantis will be launched into low earth orbit where it will rendezvous
with the International Space Station to deliver a heavy payload of spare equipment. With the shuttle program being ended in
a few years, only a few scheduled missions remain before America loses it's ability to launch citizens into space, requiring
us to rely on the Russian Soyuz spacecraft for several years (perhaps as long as a decade) before our newest fleet of rockets
is ready to blast off.

On board the STS-129 will be carrying "two pump modules, two control moment gyroscopes, two nitrogen tank assemblies, an
ammonia tank assembly, a high-pressure gas tank, a latching end effector for the station’s robotic arm and a trailing umbilical
system reel assembly for the railroad cart that allows the arm to move along the station’s truss system. There’s also a power
control unit, a plasma container unit, a cargo transportation container and a battery charge/discharge unit. In all, that’s
27,250 pounds worth of spares to keep the station going long after the shuttles retire."

So strap in, take a five minute break and watch as we launch several tons of equipment, and several people off of our planet
at 1,020.87 meters per second.

Streaming .TV shows by Ustream
Posted by Bayourat Rocketry at 7:39 AM