Assembly of Soyuz’ mobile gantry is now underway at the Spaceport

The assembly process has begun for Soyuz’ mobile gantry at the Spaceport, which will enable the integration of payloads with Soyuz in the vertical position.

The new Soyuz operating base in French Guiana is entering final preparations for Arianespace’s inauguration of commercial missions next year, with the facility’s launch pad undergoing final outfitting and acceptance, and assembly now underway for its mobile gantry.

This activity is continuing apace as the first two Soyuz 2-1a launchers are en route from Russia to French Guiana for an arrival later this month aboard the MN Colibri roll-on/roll-off transport ship. 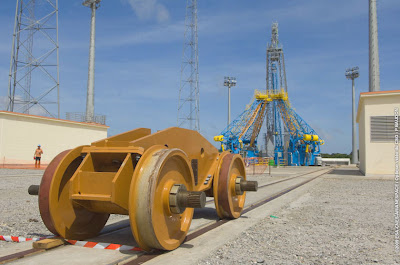 The Spaceport’s new Soyuz launch site is nearly identical to the legendary vehicle’s long-operating facilities at Baikonur Cosmodrome in Kazakhstan and Plesetsk Cosmodrome in Russia – retaining the simplicity and robustness demonstrated in more than 1,740 missions performed from these two continental locations.

One key difference is the Spaceport’s 52-meter-tall mobile gantry, which will be rolled out to the launch pad for Soyuz’ payload integration and final pre-liftoff processing. This allows for the vertical installation of payloads atop the launch vehicle, which is typical in Western operations, rather than the horizontal procedures used in Soyuz operations from the Baikonur and Plesetsk Cosmodromes. It also provides a controlled environment for the launcher, and enables customer access to the payload when required prior to final countdown.

The gantry is designed to be relatively lightweight for a structure of this type – weighing approximately 800 metric tons, according to Bruno Gerard, who is Arianespace’s project head for Soyuz at the Spaceport. In comparison, the mobile gantry previously used for Ariane 4 missions at French Guiana weighed about 4,000 metric tons.

In its retracted position, the Soyuz gantry is parked 80 meters away from the launcher, removing any potential influence on the launch pad’s acoustic environment during liftoff, Gerard said.

One of the mobile gantry’s four-wheel bogies is positioned on its track, which leads to the Soyuz launch pad – visible in the background.

During Arianespace mission campaigns at the Spaceport, Soyuz’ preparation flow begins with horizontal assembly of the basic vehicle in a dedicated launcher integration building (which is known by its Russian designation, MIK). Using the typical process employed in decades of Soyuz operations, this horizontal build-up involves its four first-stage strap-on boosters, the Block A core stage and the Block I third stage.

Once integration is completed, the launch vehicle is transported horizontally to the launch zone, and then raised to the vertical position over the concrete launch pad.

Processing of the Soyuz launcher’s upper component begins with electrical testing and checkout of its Fregat upper stage, which is performed in the MIK. Fregat then will move to the Spaceport’s S3B preparation building, where it is to be loaded with propellant. This is followed by integration with the mission's satellite passenger, and the process is completed with their encapsulation inside the payload fairing. The finalized upper component will be transferred by road from the S3B building to the launch pad, and lifted 39 meters for mating with the launch vehicle inside the gantry.

A few hours before launch, the Soyuz’ first, second and third stages will be fueled while the mobile gantry is still in position around the launcher. At 1.5 hours before liftoff, the gantry will roll back to its parked location.

Gerard said the overall equipment outfitting for the Spaceport’s multi-level Soyuz launch table is nearly complete. Current activity is focused on the ongoing installation of gas, fluids and electrical systems, as well as the acceptance process for various elements of the mission system equipment.
Posted by Bayourat Rocketry at 9:08 PM