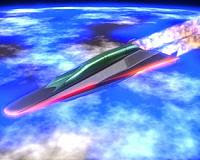 Hypersonic vehicle in the upper atmosphere travelling at Mach 8, indicating heating in the leading edges and inside the vehicle. Source: Professor Michael Smart, Professor John Drennan, David Yu of The University of Queensland.

University of Queensland researchers are testing new materials to withstand the extreme heat experienced by hypersonic vehicles in flight so they can fly for substantially longer.
Previous Australian experimental flight tests of scramjets, a type of very fast jet engine, have not lasted longer than five seconds.

The tests, conducted at Woomera in South Australia over the past eight years, have used scramjet engines made of conventional materials which have problems with extreme heat including melting, and are not designed for re-use.

However, further experimental tests are planned in 2011 through to 2013 in the HiFIRE series at Woomera using free-flying engines and eventually, a whole free-flying vehicle which will generate enough thrust to fly for a minute.

"A scramjet-powered vehicle could fly between London and Australia in two hours so we're looking at materials that can survive hypersonic speeds for longer periods."

Professor Smart said the research was particularly looking at new materials for leading edges, the parts of the wings that first contact the air.

In high speed aircraft, air friction can cause extreme heating of the leading edge - temperatures on the surface of an object travelling at Mach 5 can reach 1000 degrees C (1800 deg F). These high temperatures can not be sustained by most materials.

Another challenging problem area is inside the scramjet engine, which must handle a corrosive mix of hot oxygen and combustion products, as well as high thermal, mechanical and acoustic loadings.

Professor Smart said hypersonic propulsion heating problems could be overcome through the selection of materials, as well as design and cooling arrangements.

Professor Drennan is looking at a number of concepts to enable hypersonics vehicles to handle extreme heat for prolonged periods.

One of the concepts that is looking promising is to design materials which ablate at high temperature. However, unlike the usual systems where material is lost to the surroundings, this new material is able to replenish the lost material through microstructural design.

"The technologies we are developing will have application anywhere where performance is needed from materials in high temperature environments for long periods," he said.

"Some potential uses for the new materials might include in power plants and for exhaust nozzles of jet engines."

"Australian industries will be able to build components of aircraft, rather than having to import these materials from the U.S. and Europe," he said.

Posted by Bayourat Rocketry at 6:15 PM