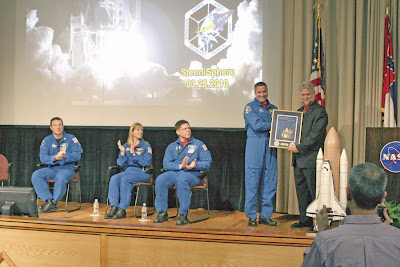 Four of the six astronauts who recently took a space shuttle ride to the International Space Station shared the story of their adventure into low Earth orbit. Visiting astronauts included, Mission Commander George Zamka and Mission Specialists Kay Hine, Terry Virts and Bob Behnken, who were part of STS 130. The mission carried a new node to the space station, complete with a cupola with seven windows on it. During Thursday’s visit, the astronauts thanked Stennis employees for their hard work that ensured a safe mission. STS 130’s primary objective was to install a new section onto the Space Station, node 3. Now that node 3, also known as the Tranquility node, is installed and operational, it houses the station’s life support systems, including oxygen generation, carbon dioxide removal and water recycling. Now that the equipment used to perform those functions has its own module, the former site of the equipment’s previous can be used for its primary function, as a lab, said Mission Commander George Zamka. Another feature included with the addition of the Tranquility node was the addition of the cupola, which is essentially a large portal with seven windows. Hire said the cupola not only provides space station crew members with a stellar view of the Earth, its primary function will be to give the crew a live view of robotic arm operations. Zamka said a future mission will work to move robot arm’s controls to the Tranquility node. When complete, the crew no longer will rely solely on camera views to control the robotic arm. Once the node was installed and hooked up, Virts said watching the node come online reminded him of a scene in a classic movie. “It was kind of like in 2001 (A Space Odyssey) when that computer Hal started doing things,” Virts said. During the event the astronauts provided commentary as part of a video compilation of the mission, which covered the team’s preparation, launch, space station docking, mission objectives and night landing. Following the video attendees at the Stennis event had an opportunity to ask questions. One of employees asked the astronauts which space vehicle they would rather take to the space station. While none of the astronauts at the event had personally had any experience with the Russian space vehicle Soyuz, they have talked with others who have taken a flight in the vehicle. According to what they were told, preparing for launch in the Soyuz is a cramped and time consuming experience. Crew members in the Soyuz are confined in the small capsule for about six hours before launch. One of the main differences between the space shuttle and the Soyuz deals with landing. Occupants of the Soyuz wait only four hours after undocking with the station before reentering the atmosphere. However, a crew needs about two and a half days to pack the shuttle and prepare for reentry after undocking, said Zamka. Landings are also a different story. Of the two spacecraft, the shuttle is said to have the softest landing.
Posted by Bayourat Rocketry at 12:03 PM