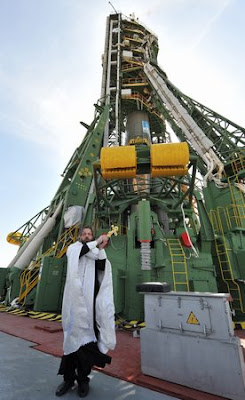 According to MSNBC the Russians are blaming malfunctioning escape system on US made hardware. So far they have been unable to duplicate the problem on the ground.

HOUSTON - When astronauts blast off to the International Space Station in a Soyuz spacecraft on Friday, they'll be relying on a safety system that failed in a still-unexplained manner less than a year ago, a top Russian space official said Tuesday.

A NASA spokesman told msnbc.com that the U.S. space agency's representatives in Russia had heard about the problem with the Soyuz's launch escape system — but were assured that it was no big deal.

Other NASA sources told msnbc.com that they hadn't been told that the system malfunctioned during a launch last May. And by all accounts, the cause of that malfunction has not yet been determined.

During the first two minutes of ascent, the Soyuz crew is supposed to be able to blast free of a malfunctioning booster in an emergency, using a launch escape tower of a type first employed on NASA's Mercury capsules almost a half-century ago.

The Soviet space program copied the idea for its Soyuz vehicles several years later, and on one occasion in 1983, such an escape system was activated to save the lives of two cosmonauts.

This week, Russian press reports quoted Victor Volchkov, an official of the Iskra plant that produces these escape systems, as saying the system performed in an "off-nominal" fashion during the Soyuz TMA-15 launch last May. The tower is routinely jettisoned two minutes after launch when it is no longer needed, but on this occasion the central thrust chamber malfunctioned, and the discarded rocket landed far from its target area.

The Soyuz ascent continued normally, carrying a Russian cosmonaut and two astronauts from Canada and Belgium into space. They reached the space station without incident and raised the permanent crew size from three to six people.

But Western analysts worry that if the Soyuz's rocket booster malfunctioned, the escape system might not have provided adequate thrust to get the crew clear of the explosion, possibly resulting in their deaths.

Volchkov, who made his comments to journalists at Russia's Baikonur Cosmodrome in Kazakhstan during preparations for this week's launch, did not discuss this aspect of the failure. He acknowledged, however, that the Russian investigation board had not yet come up with a plausible explanation for the escape rocket’s malfunction. The board is still analyzing the failure, he said.

Concern about quality control
One disturbing possibility connects the reported malfunction with the significant industrial challenge of doubling the launch rate of Soyuz crew-carrying vehicles. For the first decade of space station operations, a permanent crew of two or three people has been supported by two launches per year for six-month duty tours. Last year, the crew capacity for the expanded station doubled, requiring the consequent doubling of the Soyuz production rate.

Soyuz TMA-15, the vehicle on which the malfunction occurred, was the first of the "extra" vehicles delivered as part of the production increase.

Another rocket project, also managed by the Russian Federal Space Agency, is facing eeriliy similar questions about quality control. This is the Bulava intercontinental ballistic missile, a solid-fueled rocket being built for installation on Russian nuclear submarines.

The missile’s chief designer, Yuriy Solomonov, has complained for years about the quality of engineering support from contractors. He recently told a reporter that a string of recent failures was “payback for technological imperfection and in a number of cases for overt slovenliness associated with non-compliance with technological discipline.”

The spectacular Bulava failure last Dec. 9, which painted a spinning spiral in the skies over Norway and sparked a wave of UFO reports, was traced to “unstable operation” of the rocket’s solid-fueled third stage. The stage was built in the Iskra plant in Perm, the same facility that produces the solid-fuel rockets for the Soyuz launch escape system.

In addition, several previous Bulava failures have been attributed to defective explosive charges (“pyrobolts”) for the separation of rocket stages. Likewise, malfunctioning separation pyrobolts were also responsible for two Soyuz landing emergencies in 2008 and 2009 when the still-attached service module pointed the unshielded end of the command module into the fiery re-entry plasma. The malfunctions could have led to fire damage and the potential loss of crew members, but instead the modules tore free after being scorched. In both cases, the Soyuz craft landed far off course.

A subsequent Russian investigation blamed those failures on electrical discharges from the newly added American power panels. But that failure mode was not reproduced in ground tests, and some NASA engineers remain skeptical of the investigation's findings.

"The organizational and methodological management of quality and reliability services at rocket-and-space industry enterprises has broken down,” Raykunov was quoted by the Interfax news agency as saying. “The services are in decline."

He added that "the number of failures during flight testing and use of rocket-and-space hardware has increased substantially" in recent years, requiring urgent remedial steps. Raykunov went on to point out that ground-based experimental work lay at the heart of establishing hardware reliability. "The majority of failures are associated with insufficient work on the ground, unjustified substitution of real testing with calculations," Raykunov said. He added that the Russian space agency’s departmental experimental base is "morally and physically outdated".

What did NASA know?
NASA astronauts have been riding Russian Soyuz vehicles into space safely since 1995, and beginning next year, such vehicles will be the only access to orbit for Americans for an extended period of time. Traditional concerns over crew safety motivate NASA managers to conduct regular safety reviews before each mission.

Kelly Humphries, a spokesman at NASA's Johnson Space Center in Houston, said last May's launch anomaly didn't come up during the readiness reviews that have been conducted since then. "It's never risen to the level of that discussion," he told msnbc.com.

But Bob Jacobs, a spokesman at the agency's Headquarters in Washington, said NASA personnel in Russia knew about the problem — even if workers back in the United States did not.

“While there was an anomaly, the issue did not affect its functionality,” Jacobs explained in an e-mail. “Our Russian partners didn’t notify us because it was not considered a safety of flight issue. Had the performance review shown otherwise, NASA would have been notified during the standard general design reviews or stage operation readiness reviews.”

Jacobs said that Russian engineers "have been very forthright in describing the anomaly and its resolution for future flights."

"Our Russian colleagues work problems with the same rigor and dedication as NASA engineers and will discuss any issues with us as they arise and affect joint operations or safety,” he said.

During the shuttle-Mir program in the 1990s, the United States and Russia worked out an arrangement under which each side verified its own vehicles’ flight safety levels. The reasonable presumption was that if one side felt the vehicle was safe enough for its own crew members, the other side was justified in going along with that judgment.

So far, this arrangement has worked out: With more than 100 Soyuz crew launches on record, there has never been an in-flight failure that would have required the use of an escape tower. Cosmonauts did have to use the system to escape from a pre-launch fire on the pad, however — and going forward, the arrangement may have to change.

The burgeoning issue of deteriorating quality in the rocket and space industry, highlighted recently by top officials such as Yuri Solomonov and Gennady Raykunov, may be a warning to NASA. The future cannot be viewed simply as a linear extrapolation of the past — especially if there are fundamental negative trends in the condition of the industry, as described by these and other experts.