The Russian space agency, Roskosmos, is putting the finishing touches to the design of a spacecraft, which could carry the nation's cosmonauts into sp 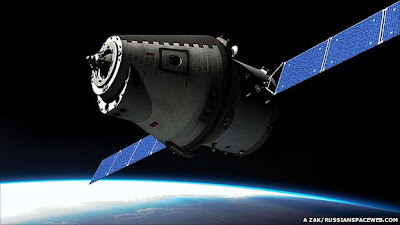 The Russian space agency, Roskosmos, is putting the finishing touches to the design of a spacecraft, which could carry the nation's cosmonauts into space in the coming decades.

Russian officials revealed details about the craft at the Farnborough Air Show.

The work is a culmination of a multi-year effort to define the architecture of a replacement to Russia's 40-year-old Soyuz spacecraft.

With the upcoming retirement of the US space shuttle, Russian ships could, for several years at least, be the only means of taking humans into space.

This would include any American and European astronauts travelling to the International Space Station (ISS).

According to officials at RKK Energia, Russia's chief contractor in manned spaceflight, the agency plans to make the final decision on all critical elements of the new ship's architecture at the beginning of August.

The company's engineers told BBC News that Roskosmos was expected to convene a special meeting of its key experts to finalise a detailed review of the preliminary design.

"We submitted the preliminary design to the agency and received feedback, which included some criticism," the first vice president of RKK Energia, Nikolai Zelenshikov, told BBC News. "We are ready to address all these issues."

Roskosmos awarded the research and development project for the future spacecraft to RKK Energia last year.

The company's roots can be traced back to the design bureau that launched the first Sputnik in 1957 and put the first man in space in 1961.

RKK Energia completed its research and development work on the future craft and submitted it to Roskosmos in April of this year.

Despite satisfying tough requirements set by the agency, the project caused controversy within the Russian space industry.

The company's decision to rely exclusively on solid-propellant engines for landing of a capsule with six cosmonauts onboard attracted particular criticism. Much of this came from TsNIIMash research institute, the agency's think tank, which traditionally evaluates and certifies the nation's rocket and space systems.

All previous Russian spacecraft, including Soyuz, used parachutes as the main system for soft landing.

To make its case, RKK Energia took the unusual step - at a preliminary design stage - of ordering the construction of an experimental propulsion system.

A non-flying prototype was intended to demonstrate that controlling unruly solid propellant would be possible during landing. According to sources within the Russian space industry, a test system was built by missile developers, who used similar technology in classified designs.

According to sources at RKK Energia, engineers retained the rocket-powered landing in the preliminary design of the ship. They left it to the agency to make the difficult decision about whether to certify the exotic system for flight, or to request a change.

Ultimately, the company added a parachute as an emergency landing system. Russian sources said that much more experimental work and funding would be required to prove that solid propellant could be safely used for a manned landing.
Posted by Bayourat Rocketry at 8:35 PM