Another Ariane 5 completes its initial build-up in French Guiana 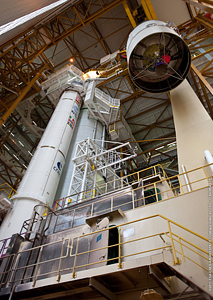 Initial assembly has been completed for the Ariane 5 launcher that will orbit a dual-satellite payload of the ST-2 and GSAT-8 satellites on Arianespace’s third heavy-lift mission of 2011 from the Spaceport in French Guiana.

This build-up milestone occurred in the Launcher Integration Building with the incorporation of Ariane 5’s ESC-A cryogenic upper stage and the vehicle equipment bay – which were installed as a single unit.

Once the integrated Ariane 5 completes its current check-out phase, it will be ready for transfer to the Spaceport’s Final Assembly Building where it will be equipped with the mission’s dual-satellite payload. The Final Assembly Building currently is occupied by another Ariane 5, which is being readied for liftoff on March 30 with the Yahsat Y1A and Intelsat New Dawn spacecraft.

The Spaceport is designed for such parallel mission operations, enabling two Ariane 5s to be prepared in support of Arianespace’s sustained mission rate for its growing order book of international payloads.

The flight with ST-2 and GSAT-8 is scheduled for May, and is one of six Ariane 5 launches planned by Arianespace in 2011. ST-2 was developed for ST-2 Satellite Ventures Pte Ltd., a joint venture formed by Singapore Telecommunications Ltd (SingTel) and Chunghwa Telecom Company Ltd; while GSAT-8 is a spacecraft for the Indian Space Research Organisation.