Seattle Museum Of Flight Already Building a Home For A Retired Shuttle. 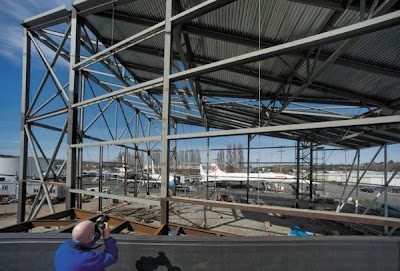 
A mixture of confidence, optimism and fear of jinxing their chances keeps Museum of Flight employees from discussing the possibility of not receiving one of the much-desired space shuttles NASA is about to retire.

“We’re not even thinking in those terms,” museum spokesman Mike Bush said this week. “It’s the rarest of artifacts anywhere, and there is no better place for a space shuttle.”

The Museum of Flight south of Seattle is among 29 institutions nationwide competing to be a final destination for the Discovery, Endeavour or Atlantis.

The Enterprise, a prototype used for landing tests that never flew in space, also might be up for grabs if the Discovery is given to the Smithsonian Institution as rumored.

The Seattle museum is considered a front-runner and has taken bold steps with the expectation that a shuttle eventually will arrive piggybacked on a 747 airplane.

A $12 million Space Gallery built specifically to house a shuttle is under construction across from the main museum and should be completed by July.

The 15,500-square-foot building will have a glass facade so passersby on East Marginal Way can peer inside. It also has adjustable pillars so a shuttle – which is 122 feet long and 56 feet high – can slide inside.

“We’re going to have a great Space Gallery that tells (the human space travel) story whether we have a shuttle or not,” museum president Doug King said. “But it will be a better story with a shuttle.”

The woman leading the effort to bring a shuttle to the Pacific Northwest is Bonnie Dunbar, a retired astronaut who has been to space five times, including trips aboard the Atlantis and Endeavour.

She spent hours filling out a 20-page application to NASA, agonizing over how to cram the museum’s entire pitch into a limited space.

Her team launched a website explaining why the Museum of Flight “has the right stuff” to house and maintain a shuttle, and collected 10,000 signatures on a petition.

Dunbar joined state tourism officials in raising a specially designed space shuttle flag atop the Space Needle – one she and her associates hope to fly again in celebration after the April announcement.

Dunbar is unsure whether the NASA administrator is monitoring their shuttle boosters website or the museum’s progress on the Space Gallery, but she said reaching the public with that information is just as important.

“We wanted to make sure our own folks in the Northwest understood what we’re doing,” she said.

The museum isn’t the only front-runner going to great lengths to land one of the shuttles.

The visitor center at NASA’s Johnson Space Center in Houston set up a website and brought in a marketing firm to argue a shuttle would be at home there because NASA’s Mission Control guided the spacecraft during flight.

In Manhattan, the Intrepid Sea, Air and Space Museum has collected 150,000 names on a petition to display a shuttle on Pier 86.

Other contenders include the Kennedy Space Center in Florida, the Museum of the United States Air Force in Ohio and the California Science Center in Los Angeles. NASA has not released an official list of hopefuls.

The Museum of Flight first asked for a shuttle in 1986, and again in 2005, with the intention of telling the human space flight story, King pointed out.

“It’s really important that the museum has been working on this a long time,” he said. “It’s not just, ‘Hey, gee, there’s a shuttle out there.’

“There are a lot of museums weighing in here at the end. But we’ve been there, we’ve been ready, and we’ve done everything that’s been asked of us.”

King even contends the museum is one of only two competitors that meet all of NASA’s criteria:

• A climate-controlled building to house a shuttle, which weighs 170,000 pounds and has a wingspan of 78 feet. (If the museum doesn’t get a shuttle for its Space Gallery, other artifacts will be placed inside.)

• A 10,000-foot runway behind the museum where a Boeing 787 could deliver a shuttle into retirement.

• An educational program that reaches 140,000 children in kindergarten through high school each year.

In fact, the museum plans to build a permanent campus for Aviation High School on museum grounds in hopes of using STEM education – science, technology, engineering and math – to inspire future generations.

Once the shuttles are retired, they’ll be decommissioned and readied for museum life. The work, which could run the chosen institutions $28.8 million, is expected to take about nine months.

The museum plans to raise the funds if necessary and expects private donors will step in.

Museum officials said they have no spacecraft preference.

“We’re talking about iconic historical artifacts, a symbol of American ingenuity,” Dunbar said. “We’d be proud to have any one of them.”