Jacques Valier Advanved Rocketry At The Cost Of His Life 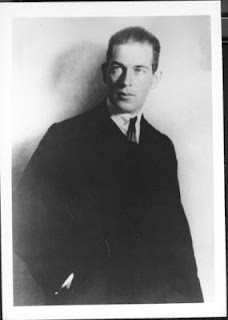 Just two years earlier, on March 15, 1928, Valier had "built the world's first rocket car," powered by solid fuel, said his biography at the International Space Hall of Fame in Alamogordo. The next month, on April 11, Valier demonstrated the vehicle in a 40-second test. J. Kuhr Huddle, the American consul to the Department of State, summarized it in an April 17 memorandum, which in 1970 was published in "The Papers of Robert H. Goddard Vol. II."

"If such a device is finally perfected É it is to be assumed that it would possess capabilities of being worked into a constructive force of considerable magnitude and that also it might form a terrible engine of destruction in the hands of subversive elements," Huddle wrote.

Observers described "an astonishing demonstration of the practicality of rocket-propelled apparatus which its sponsors claim is capable of overcoming the force of the earth's gravity," Huddle said. He included a Der Mittag newspaper story reporting the "peculiar vehicle (was) a low, light racing car without a motor. É Its rear is a steel box with 12 round openings from which project the steel nozzles of the propulsive rockets." When the driver ignited them, the car surged forward with "an ear-splitting, whizzing roar," followed by "a trail of fire (that) belched onto the concrete track É The explosive force brought the car to a speed of (62.14 mph) within eight seconds."

According to Huddle, automaker Fritz von Opel not only financed Valier, but also "turned over to (him) all the facilities of Germany's largest auto factory in furtherance of (Valier's) projects." He added that Der Mittag reported Valier touted a flying car-turned-rocket airplane would eventually travel "at the borders of the terrestrial atmosphere É from Berlin to New York in two hours." The sole development roadblock was "but a monetary problem."

Goddard, in an Oct. 14, 1929, correspondence, felt Valier took "the idea of the rockets for his rocket car" from a Smithsonian article he had written.

Valier was born in Bozen, Austria-Hungry, in 1895. He studied astronomy, mathematics and physics at the University of Innsbruck, then "enlisted in an (Army) aviation unit" during World War I," his biography said. Post war "he attended schools in Vienna and Munich. Although he never received an advanced degree, he became a successful writer on scientific matters."

"Valier differs basically from the other people concerned with rockets in that he was an astronomer," said "Max Valier: A Pioneer of Space Travel." "He has never worked on the rocket for a Ministry of War nor for war purposes. He believed that he was serving peace on earth whilst directing people's gaze into the vastness of the universe. In this way he hoped that they would forget quarrels and wars."

As did Wernher von Braun and Willy Ley, Valier discovered Hermann Oberth's 1923 "The Rocket into Interplanetary Space." After devouring the book, Valier "was immediately compelled to write a letter to Oberth," said "Max Valier: A Pioneer of Space Travel." The two began corresponding and, in 1924, the biography stated, "with Oberth's assistance, Valier wrote a popularized discussion of rocketry and outer space, 'Advance Into Space.'" Others ridiculed him as a "sensationalist" and called him a dreamer with a "bald thick skull," said "Max Valier: A Pioneer of Space Travel." But his passion was infectious and the book quoted a contemporary who recalled: "Valier visited us frequently from 1926 onwards. He arrived like a rocket, full of plans and enthusiasm, flung his old bicycle into a corner of the passage of the house and stormed into the atelier (workshop). 'I need a new form of an aircraft, a racing car, a rocket, a naviplane' he shouted and drew a few sketch drafts from his pocket.'"

In 1927, Valier helped found the Spaceflight Society; counted among the more than 500 members a year later were co-founder Ley, von Braun, and Oberth. On Dec. 8 of that year, "Max Valier: A Pioneer of Space Travel" said he and Opel signed a contract "to which Valier offered the Opel company his project of rocket propulsion."

In 1929, Valier built a solid fuel-powered rocket sled, which the biography said "reached a speed of 250 mph." "Max Valier: A Pioneer of Space Travel" quoted Valier referring to an Oct. 3, 1929, sled run that stated "all four wheels flew off the vehicle as a result of the spokes having broken." Subsequently, he modified the design to travel on a "system of runners" that eliminated "rotating parts."

Valier died in Berlin when a chemical reaction in the combustion chamber of a liquid-fuel experiment exploded on a test stand, "the fault of a risk still unknown at that time inherent in the new propellant," said "Max Valier: A Pioneer of Space Travel." "He died for the great idea to which he had dedicated his life."

A year later, on May 2, 1931, the editor of RWZ, Heinrich Weinz, explained how Valier "was the victim of a fatal accident which occurred while he was testing his first large reaction motor with liquid fuel." Newspapers had wrongly attributed his death from "the domed cover of a tank (penetrating Valier's) chest," to an exploding gas bottle after which "Valier was found dead beneath a heap of debris from shattered steel cylinders."

Others built on Valier's achievements, claimed credit and his work was "quickly forgotten," said "Max Valier: A Pioneer of Space Travel." The book pointed out Weinz "rightly denounces the unkind forgetfulness of those who took up (Valier's) work, which was extremely successful technically and experimentally, and developed it just a little further, without making any mention of the man whose suggestion it had been, and who had laid the foundations."


Michael Shinabery is an education specialist and Humanities Scholar with the New Mexico Museum of Space History. E-mail him at michael.shinabery@state.nm.us.
Posted by Bayourat Rocketry at 9:45 AM