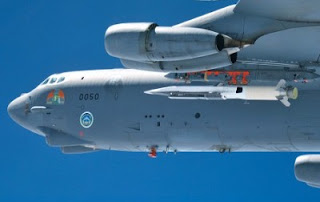 "We are proud of the first flight results, and at the same time we understand the inherent risk in a high-technology demonstrator like the X-51A," said Curtis Berger, the director of the hypersonics programmes at Pratt & Whitney Rocketdyne, the company that built the X-51A's fuel-cooled supersonic combustion ramjet, or scramjet engine. "We can't wait to get this second vehicle in the air and show what we can do."

Four X-51As were built for the Air Force by teams at Boeing and Pratt & Whitney Rocketdyne. The X-51A made history on its inaugural hypersonic flight test on May 26, 2010, when it was launched from Edwards Air Force Base, California, tucked under the wing of a B-52 Stratofortress. After release, it ultimately accelerated to Mach 5 under scramjet power. The flight was about 10 times longer than any previous hypersonic scramjet flight and "80 to 90 percent" of flight test objectives were achieved, programme officials said.

Underscoring the complexity and uncertainty of hypersonic flight testing, Charlie Brink, the Air Force Research Laboratory X-51A programme manager, noted that not everything went perfectly on the first flight test. The vehicle failed to accelerate as quickly as anticipated and the flight test had to be terminated after 143 seconds under scramjet power. A perfect flight would have lasted another 100 seconds and accelerated the X-51A cruiser to Mach 6.

After the flight, members of the flight test team independently scoured over telemetry data for a month. Then they conducted a comprehensive "fault tree analysis" to identify every piece of anomalous data to determine the root cause.

According to Brink, two separate fault trees were identified: The vehicle failed to accelerate as rapidly as expected and unexpected temperatures and pressures were observed in internal sections of the cruiser. Engineers examined and walked through 156 different nodes in excruciating detail in search of a cause.

"In a demonstrator you learn things," Brink said.

Programme officials already knew from wind tunnel engine tests about the intense heat the scramjet engine and hypersonic flight creates. During flight, the scramjet engine actually grows about three-fourths of an inch due to heat expansion. The effect complicates design for such things as interface seals.

The Boeing "Phantom Works" and Pratt & Whitney Rocketdyne teams pulled the engines from the three remaining flight test vehicles and focused on the interface between the rear of the fuel-cooled engine and its vehicle mounted nozzle. Brink said the effort identified an "apparent thermal seal breach" at the interface which was not as tight as it needed to be. This caused some of the hot gases that should have provided thrust to leak into the rear of the cruiser.

"We went through a complete critical design review of the interface," Brink said.

In the end, the team made design changes to make it a "much more robust" interface. All of the remaining X-51As have been modified with the new beefed up design.

Mission and weather permitting, a B-52 test crew will take off March 16 from the Air Force Flight Test Center at Edwards AFB and the flight test team will run through a dress rehearsal for the entire flight profile for the next hypersonic mission, albeit without the X-51A attached.

The second X-51 is waiting in a hangar at Edwards AFB and is ready to fly, Brink said. He added the next flight is scheduled for March 22 over the Navy's Point Mugu Sea Range but a number of factors with the flight-test vehicle, weather, range availability, and supporting test assets could cause the date to slip.

The X-51 will be carried to an altitude of roughly 15 000 metres where it will be released and its MGM-140 rocket booster ignited, propelling it to Mach 4.5. The rocket will fall away and the SJY61 scramjet engine will take over and accelerate the aircraft to around Mach 6.

Brink said officials at the Defence Advanced Projects Research Agency (DARPA) and at NASA have been crucial to the X-51A's development. Those at DARPA provided substantial funding and NASA officials provided strong support via access to their wind tunnels at Langley Research Centre and to the supercomputer at NASA Ames Research Centre where computational fluid dynamics calculations of drag and other aerodynamic forces were performed.

He noted the X-51A was not designed to be a weapon, but its success as a technology demonstrator soon may enable the transition of technologies to a new class of hypersonic weapon systems. He added that there are a number of initiatives in the works, but none had been decided upon and there currently is no programme of record for a hypersonic strike or intelligence, surveillance and reconnaissance (ISR) aircraft based upon the Waverider.
"Right now we are just focused on the X-51's next flight," Brink said. "We definitely hope it will go longer...and faster than the first."
The X-51 project is managed by the Propulsion Directorate within the US Air Force Research Laboratory (AFRL). The project began in the 1990s when the AFRL started the HyTECH supersonic propulsion programme. Pratt & Whitney was contracted to develop a scramjet engine, the SJX61, which was planned for NASA’s cancelled X-43C. Following cancellation, the engine was moved to the AFRL’s Scramjet Engine Demonstrator programme in 2003. The resulting aircraft was designated X-51 in September 2005.
Ground testing began at the end of 2006. Flight testing was planned for 2009 but the first captive test flight, with the X-51 attached to the wing of a B-52, only occurred on 9 December 2009. The first flight in May 2010 resulted in the longest ever scramjet burn time of 140 seconds – the X-43 previously held the record at 12 seconds of scramjet burn time while setting a speed record of Mach 9.8.
Posted by Bayourat Rocketry at 11:16 PM