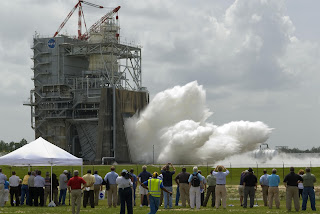 A facility readiness review in mid-March indicated all major modifications have been completed on the historic A-2 stand to begin testing the next-generation J-2X rocket engine this summer.

The first test of a Saturn V second stage at Stennis was performed at the A-2 stand on April 23, 1966. Stennis engineers tested 27 first and second Saturn V rocket stages for the Apollo Program, including those used to carry humans to the moon.

After a decommissioning period, Stennis employees spent 10 months converting the A-2 stand from space shuttle main engine parameters to those needed for the new engine test series. The March 16-17 facility readiness review identified no major actions, which means the A-2 Test Stand is ready to receive the J-2X engine and begin checkout testing activation of engine critical systems. Stand employees now will work through the final items to be completed before installation of a J-2X engine in early June.

"Some of the hardware was decades old and nearing the end of its serviceability," said Gary Benton, manager of the J-2X engine testing project at Stennis. "Also, the J-2X has different testing requirements than the space shuttle main engine. It was a major transition completed on a very demanding schedule."

The transition work from the space shuttle main engine project to the J-2X test project included structural, electrical and plumbing modifications to accommodate the different geometry of the J-2X engine, and included the installation of a new J-2X engine start system. Liquid oxygen and liquid hydrogen transfer lines that dated back to the 1960s also were replaced, as was other piping on the stand. Control systems also were upgraded on the stand.

The J-2X engine is being developed by Pratt & Whitney Rocketdyne for NASA as a next-generation engine that can carry humans beyond low-Earth orbit to deep space. Engineers at NASA's Marshall Space Flight Center in Huntsville, Ala., manage J-2X engine development. Stennis is preparing three stands to test the new engine. Power pack testing is scheduled on the A-1 Test Stand. Verification and sea-level testing will be conducted on the A-2 Test Stand. The A-3 Test Stand under construction and set for activation in 2013 will allow operators to test new engines at simulated altitudes up to 100,000 feet, a critical requirement for a deep space engine.

Plans now are to install a J-2X research-and-development engine on the A-2 Test Stand this summer. Testing will begin soon afterward and continue throughout the year. Various verification and start-sequence tests will be performed.

"This is the future for American space exploration," Benton said. "We are excited to play a key part in the progress of the nation's space program."
Posted by Bayourat Rocketry at 12:09 PM