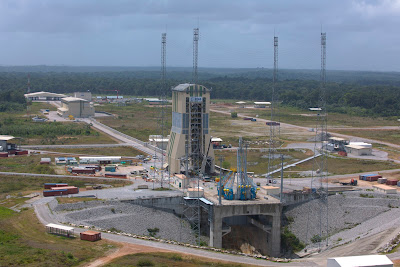 The Kourou Spaceport, in French Guyana, South America now has a new, fully-operational launch pad, that is capable of supporting the take off of Russian-built Soyuz rockets. Yesterday, March 31, the complex was officially handed over to Arianespace.

This marked an important milestone towards the first flight ever to be conducted by a Soyuz rocket outside the territory of the former Soviet Union. The European Space Agency (ESA) constructed that pad, under a contract with the Russian Federal Space Agency (RosCosmos).

The collaboration agreement calls for Russia to sell several Soyuz rockets to Europe. The launches will be operated and managed by Arianespace, one of the first commercial spaceflight companies in the world, and the constructor of the successful Ariane 5 heavy-lift delivery systems.


In a ceremony that took place Thursday, ESA officials handed over the newly-completed launch pad to Arianespace, which will be in charge of operations here from now on. Preparations will soon begin at the facility, in anticipation of a launch scheduled for later this year.

While initial excavation and ground infrastructure work began at Kourou in 2005 and 2006, respectively, it wasn't until February 2007 that the construction of the actual launch pad started.

By mid-2008, Russian engineering teams were already on site, installing a mobile gantry, test benches, fueling systems, and the launch table. In late 2009, the first two Soyuz rockets made their way to South America, for integration and preparation.

Over the past few months, European and Russian partners, in collaboration with CNES (the French space agency) worked towards certifying the launch site, called Ensemble de Lancement Soyuz (ELS).

CNES was the primary contractor ESA selected for the construction work. The organization also handled the tests the launch pad was subjected to. Issues covered included all mechanical, fluid and electrical elements at the installation.

After the acceptance review was passed, CNES handed over control of the new facilities to ESA, which then transferred responsibilities further to Arianespace. The latter will soon begin the necessary procedures to qualify its launch operations.

When Soyuz flights begin from Kourou, ESA will have two of the most reliable rockets in the world at its disposal, as will Arianespace. It is expected that the new launch pad will increase the yearly number of take-offs from French Guyana by a significant margin.
Posted by Bayourat Rocketry at 1:23 PM